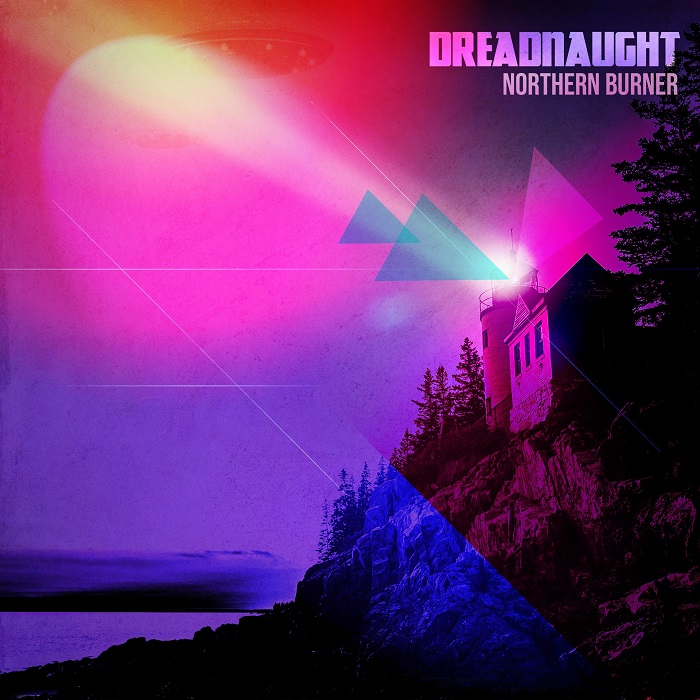 Way back in 1996, the band Dreadnaught formed out of the dust and debris of the cosmos and made their home in New Hampshire and Maine, and shortly thereafter produced their first demo cassette. That means that 2021 was the band’s 25th anniversary, and although some of the membership has changed over the years, by their 2001 release The American Standard they had evolved into the core trio of Bob Lord (bass), Richard Habib (drums), and Justin Walton (guitar); while the band featured some vocals up through their 2017 album Hard Chargin’, their latest, Northern Burner, is an entirely instrumental endeavor. In addition to the three core members, guests include Duncan Watt on keyboards, Mac Ritchey on electric oud and percussion, and Jon Wyman (programming), giving the band an especially full sound that hits the listener on the opening track “Pink Light,” an introductory piece just shy of two minutes, the crunchy organ delivering the very first chord. In fact, throughout the album, the nine tracks alternate between these shorter interludes and longer compositions, the first of the latter being “Pig & Pony,” a certifiable rocker with plenty of complexities; just when you think it’s gonna settle down it, it gets all busy and quirky again, and the clever arrangements embrace a lot of musical humor. “Rum Cake” is another short introductory piece that leads straight into “Monsignor Bananas,” an eight-plus minute number supported by an irregular funky groove, full of greasy guitar textures and plenty of turns and twists that will surprise even the most discerning prog listener, in fact right in the middle of the piece it changes completely into sort of a laid-back surf sound, then returns to the groove where it all started. I don’t like to say things like ‘best track,’ but if I did, “Monsignor Bananas” would probably be a supreme contendor. Some of the other standouts include “Pony & Pig,” with its odd meter groove and strange sounds mixed in, and a few minutes in the duel between organ and guitar gets wild and ferocious, then on a dime, everything stops and the song explores a new direction. With “Sundown at the Barnyard,” the song begins in an explorative style, but then finds Dreadnaught’s propensity to rock out, with a soariing guitar solo that might be the album’s most impressive, and a honky-tonk piano ending that makes the listener think WTF? There’s an abundance of surprise at every turn throughout Northern Burner, a brilliant album beginning to end.