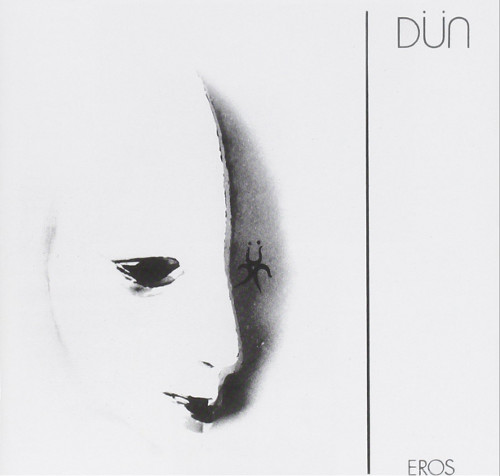 This lost French classic from '81 has much to recommend. A six-piece from Nantes in western France, they featured keyboards, guitars, bass, drums, tuned percussion and flute, and their sound combined elements of zeuhl, chamber, symphonic, fusion, and even some hints of Zappa. Dün (pronounced dune) was together from around '77 to '81, and unfortunately Eros is the only recorded evidence they left behind, recorded near the end of their life as a band. The album proper consists of four long, primarily instrumental tracks effluent with energy, with all of the aforementioned stylistic elements pouring into something wholly original. On most of the compositions there are passages with complex repetitive cells, busy drumming, and throbbing bass that pretty much defines the zeuhl sound; but the softer flute, keyboard and mallet passages tend to be more in a chamber or even symphonic vein, even flirting with ethnic percussive sounds on the closing title track. This is the second reissue of the album – the first was around 12 years ago on the Soleil Atreides label, which itself was a sub-label of Soleil Zeuhl. This time out, in addition to digital transfer and mastering by Udi Koomran, there are five bonus tracks recorded in '78 and '79: two alternate early versions of "Arrakis" plus alternate versions of "Bitonio" and the title cut, and "Acoustic Fremen," a more relaxed chamber tune that's very different from anything on the album proper. An essential reissue.

Zeuhl alert! One of the best, yet little known zeuhl gems has re-surfaced thanks to the specialty label Soleil Atreides, the same folks who recently gave us Archaia. Dün is rather more in the mature Magma vein, featuring that fierce, buzzing Top / Paganotti bass, an occasional blend of wordless, scat, and invented language vocals, and a seriously tweaked jazz fusion harmonic language. At times, Dün's style leans rather more towards the fusion end of things and is also smoother, a couple degrees less aggressive and brutal than Magma at their wildest, somewhat reminiscent of Jacques Thollot and perhaps even Michel Altmayer (Troll). However, when they want, Dün bristles and seethes with plenty of energy and ferocity and takes a back seat to none when it comes to brutal, aggressive music and a go-for-the-jugular attitude. An element that sets Dün apart from Magma and other zeuhl groups is the instrumentation. An important, even primary role is given over to the flute, and mallet percussion (xylophone and vibraphone) figures prominently in several arrangements. The latter suggests Zappa at times, while biting, jagged guitar brings Eider Stellaire to mind. In addition to the original album, there are four hefty bonus tracks nearly doubling the length of the album, including three alternate versions recorded two and three years before the versions found on the official album in significantly different arrangements. Also included is a previously unreleased track that is alternately lyrical and angular. This reissue is not to be missed.