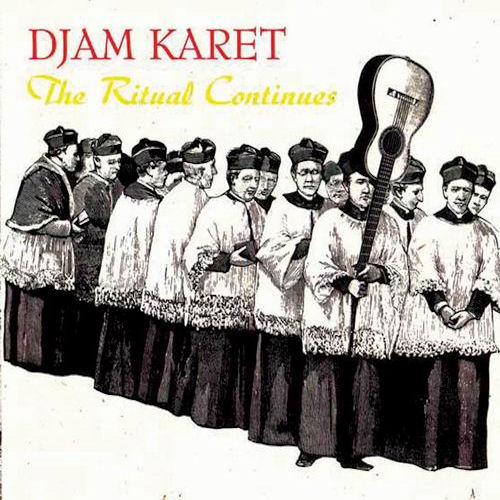 Imagine a sound with the force and power of mid-period King Crimson, the fluidity and spaciness of Pink Floyd, and the percussive power of Peter Gabriel's Security. Throw into that mix a generous helping of the new Industrial Rock with plenty of improvisation, and you have the sound of Djam Karet: progressive, snarly, full of fire, and 100% instrumental. One of the most welcome reissues of the year is this, their 1987 classic, heretofore only available on cassette (although it did appear briefly on LP in Brazil). This showcases the band's live show at that period in time, and successfully integrates the wide diversity in their material, from the harder rocking numbers like "Technology & Industry," to the more ethereal spacy cuts like "The Black River." At times both ends of the spectrum fuse perfectly, exemplified by the outstanding title track, or "Shaman's Descent." One of the more ethnic / industrial oriented tracks from the original cassette ("A City of Two Tales") does not appear here, but instead has been replaced by two tracks from their 1982 cassette Kafka's Breakfast, and "A Quiet Place" has been re-recorded, extended, and re-titled "Falling Down 1993." For anyone not yet familiar with DK, this is as good a place as any to start.

Tsunami - Anthem of the Great Wave – Tsunami are a Dutch five piece of guitar, keys, bass and drums and a very obnoxious lead vocalist who doubles on guitar. This guy is your typical quasi-emotional overbearing neo-clone nasal-whining...  (1994) » Read more