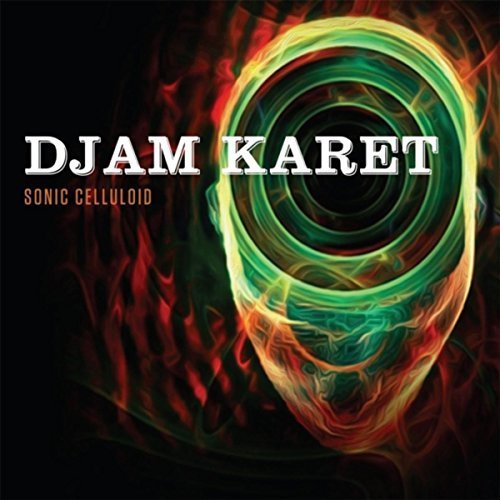 When a band has over 20 excellent all-instrumental releases, and you know them all well, it’s instinctive to compare any new release to those that have gone before it. The first thing one realizes after a few listens to Djam Karet’s latest, Sonic Celluloid, is that this one is very different, shattering the mold of much of those previous releases. That classic sound of a growling rhythm section flanked by two blazing guitars trading off solos, or dark dronescapes of textural patterns that swirl around inside the listener’s head has been more or less pushed to the back burner in favor of more melodic imaginations with prominent keyboard underpinnings. It’s done extremely well and seems like a logical next step for the band that’s been together making music for over 30 years. While all four original members play on the album, as well as newer members Aaron Kenyon (with the band to varying degrees since 2003’s A Night for Baku) and Mike Murray (who started around the time of The Heavy Soul Sessions) play on the new album, the core of what’s here involves drummer and keyboardist Chuck Oken, guitarist and keyboardist Gayle Ellett, and bassist Henry Osborne, with the others members mostly participating on this song or that (Murray on three, Henderson on two, and Kenyon on one), apparently everyone contributed as much or as little as they wanted to to the overall effort. The sound on all ten cuts is very layered and offers numerous points for a listener to focus on, with keyboards, sequencers, and drums forming the structural elements. While guitar solos are offered up more sparingly, the fact that they are is the magic that makes them stand out on top of it all. One track in particular, “Long Shot,” for its first three minutes is mostly a keyboard workout that may remind listeners of classic Tangerine Dream, before drums bass and guitar come in to take it in a different direction. “Lower” is another piece that stands out among the others, with a powerful melodic line driven by multiple guitars, with sampled voices in the background. “Oceanside Exterior” is probably the most mid-70s Floyd-like of all the tracks here, from the backing keyboard textures and melodies to the powerful guitar solo that leaves the listener wanting more. Mellotron is used on a number of cuts, but nowhere more effective than on the closer, “The Denouement Device,” pushing a beautiful flute-like melody that crashes head on into a massive Gilmour-like guitar solo. A similar approach is used on “Numerous Mechanical Circles,” with nearly no drums or overt rock elements, instead fused together with various keyboard and sequenced sounds, along with some Mellotron, and again, those mysterious spoken voice samples lurking in the background. All taken, Djam Karet have gone out of their way to produce a sound very different than anything they have done before.