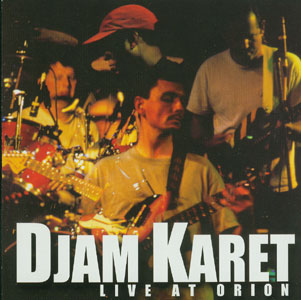 With the band having recorded little and performed even less in the past five years or so, questions existed about the ability of Djam Karet to deliver the goods in concert. Those who were present on two warm nights at Baltimore’s Orion Studios need not have worried. They were treated to an incredibly powerful, commanding show that left heads shaking and ears ringing by the end of the night. Djam Karet is a Balinese phrase loosely translating to “time that stretches” in honor of the lengthy jams that the band favored in their early days. The one new tune on the live disc is an improvisation that opens with a remarkable sense of restraint with some spacy guitar playing that develops into a solid beat and ultimately catches fire. Many of the tunes build slowly but then reach intense climaxes with a wall of blazing, feedback-drenched guitar crescendos. The material somewhat surprisingly focuses primarily on earlier albums and the versions are often re-worked and re-arranged. The tone is often dark as the music is tension-filled and has a sense of foreboding. Perhaps someday the band will do the soundtrack to a horror film! The effective use of dynamics sets up the blistering guitars of Mike Henderson and Gayle Ellett and the throbbing, agile bass of Henry Osborne. Djam Karet are an extremely cohesive unit after playing together for 15 years and this empathy enables them to improvise at almost a compositional level. This album is a great starting point or a very worthy addition to your Djam Karet collection. The only (very minor) quibble is that the drum sound is a bit muted on the record compared to Chuck Oken’s savage pounding in concert. My suspicion is that his playing was so loud in concert that it was difficult to capture the balance accurately. The sound quality on the disc is superb otherwise and the audience is unobtrusive. The bottom line is that this qualifies as one of the best live recordings that I’ve heard and it qualifies as an easy “top ten” selection for my best of ‘99 list.