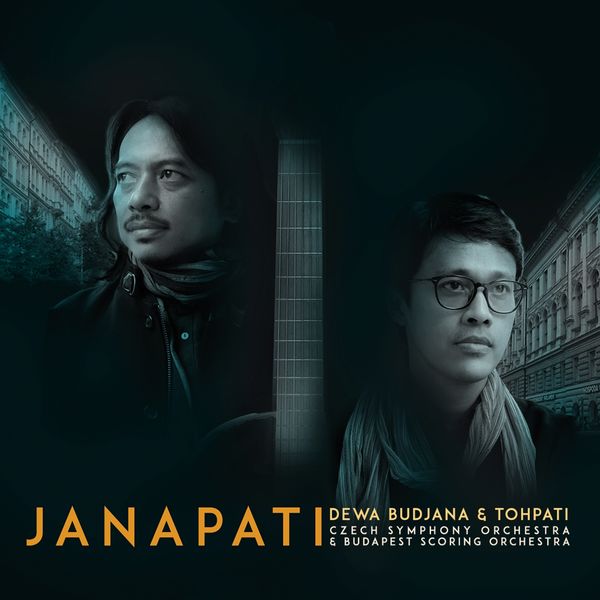 Certainly Janapati is an ambitious project by these two outstanding Indonesian guitarists who should be well known to all readers of Exposé, since we've covered many of their previous individual releases in these pages over recent years. Their basic stock in trade here is for the better part instrumental jazz augmented by a heavy orchestration, specefically the Budapest Scoring Orchestra and the Czech Symphony Orchestra, with the bulk of the orchestral parts scored by Tohpati, with Budjana’s involvement on two of the pieces. Drummer Demas Narawangsa and bassist Adhitya Patama are also present for the proceedings. In general, on the orchestra dominated pieces, one typically just occasionally hears the two guitarists, who are more often smothered by all the instrumentation, though the result on those pieces is very tasty and well done, including the opening title track, cowritten by the two principals, which alternates between orchestra and band, somewhat reminiscent of the way the late Frank Zappa approached the subject. “D Romance” and “Bermain” are two other heavily orchestrated numbers, the latter seeming to owe some credit to traditional song, though I can’t put my finger on the source, with a break at the two minute mark for a beautiful classical guitar solo, that slowly brings the orchestra back in for the coda. But that’s not the whole story; about half of the numbers here, the orchestra is relaxed and incidental, such as the beautiful “Rainy Days,” or absent altogether, like the four-plus minute guitar duo “Ratu Kanya” wandering between classical and jazz idioms as it goes. One of the most interesting pieces with the orchestra has to be “Children Songs,” a five minute medley of Indonesian traditonal and cover songs of children’s pieces, a perfect blending of guitarists and orchestra. The outright rocker “Duology” erupts later in the set, a Tohpati-Budjana composition with no orchestra at all, just a tasty slab of two guitars, bass, and drums with plenty of guitar soloing over its five minutes. A shorter acoustic version with only the guitarists closes the album nicely. All taken, Janapati is a collection of very nice surprises, beginning to end.