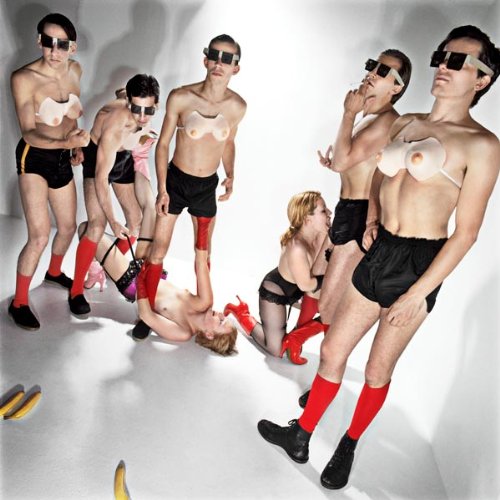 Long before there were five nerds with red plastic flowerpots on their heads playing goofy songs on what sounded like Atari game machines or Commodore 64’s, there was a real band of innovators playing a raw and convincing rock laced with elements of punk, progressive, and a dollop of genuine weirdness. Much of that punky aggression carried through to their first Warner Brothers album Q: Are We Not Men? A: We Are Devo, produced by Brian Eno, but began to fade shortly thereafter as the band relied more and more on electronics and drum sequencers. Shortly after the turn of the decade and their big hit “Whip it,” the excitement was all but gone, as the band descended further and further into banal kitschiness. But this review is about the early days of the band, going forward on their own years before being signed to a major label. Hardcore reissues the two earlier Hardcore Devo Vol.1 and Vol.2 releases that Ryko put out in 1990 and 1991 respectively, now out of print for decades, and adds a half dozen or so bonus tracks to the end of the second disc. This is the real deal, the origins of the band and their whole concept about de-evolution; If one has never heard anything but “Whip It” and “Peek-a-Boo,” this will be a real ear-opener. Several of the best cuts on the band’s first Warners album are here on disc one, in their early, more cutting-edge versions originally recorded by the band between 1974 and 1977. The second disc covers the same time period, but these are the also-rans that didn’t quite make it to Volume 1, but are still quite worthy and display the same proto-punk edginess. The bonus tracks on disc 2 feature some surprises (an early version of “Clockout” from the band’s second Warners album is here), but for the most part, these are the rough demos and poorest recordings on the set. Still, it’s good to hear these unexpurgated cuts along with the others.