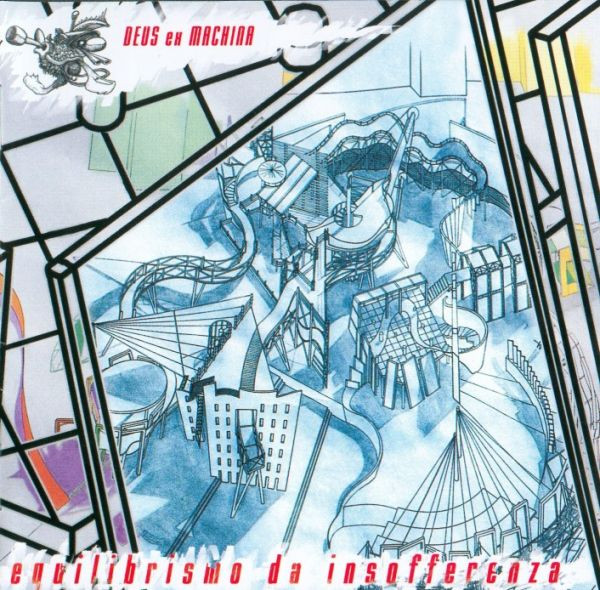 The recent release of Devoto was an opportunity to revisit the band's back catalog and compare the Kaliphonia era to the Cuneiform era. Bands that have been around a long time — and Deus ex Machina have been around a long while with nearly every member intact — tend to go from young, hungry and ambitious to perhaps a little less energetic, yet more mature, and that's the arc you see with them. Equilibrismo da Insofferenza was the band's most ambitious release, marking the end of the Kaliphonia era, and it brought a lot of changes after what many consider the band's high water mark, De Republica. Some of how I perceived Equilibrismo was through interviewing the band at their Progfest appearance where they talked about the making of this album, which (IIRC) was the studio debut of their new keyboards player Luigi Ricciardello, who brought considerable chops to an already talented group. On Equilibrismo the band added some very Nucleus-like horn charts, making this not only their most jazz-infused release, but their most complex and involved as well. Listening to it now for the first time maybe since the 90s, I'm mostly impressed at how dense the music is here, how clever and dynamic the arrangements. But what's noticeable is the high level of energy, which is something I remember from their performance at the festival, the absolutely blistering intensity of their attack, in fact I think they were quite noteable for being one of the few bands of the era that had that level of energy. I have to admit I still marvel at this release, it could really only come from a group of people with such a high level of talent and obvious chemistry and it may have left some listeners behind as large segments of this verge on the inpenetrable. Unfortunately the Kaliphonia era albums are out of print, but some of them don't appear to have appreciated too much and can be found for sale on Discogs.