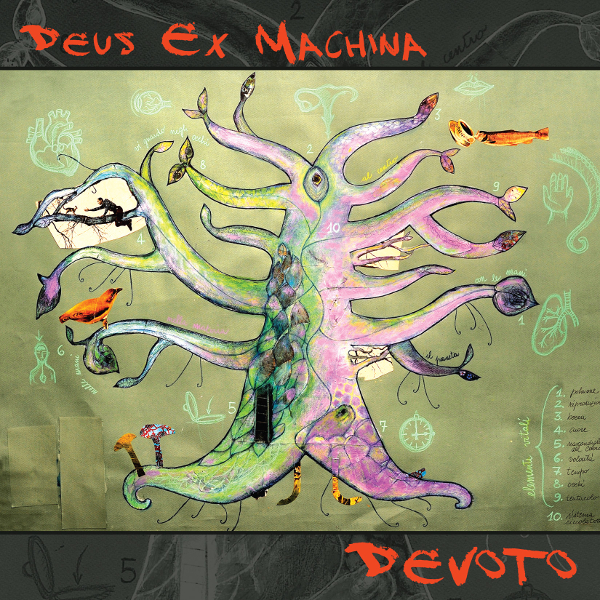 Long-time fans of progressive rock will remember the string of outstanding releases by this Italian band. In particular, their third album, De Republica, captured the hearts of adventurous prog fans around the world, a shining example of how a band in the 90s could be truly progressive without sounding like they’re rehashing past glories. The band has never been prolific, with only three releases since the turn of the century, so expectations are high for Devoto. Sonically, Deus Ex Machina has a number of distinctive factors. First among these is the voice of Alberto Piras, and it is here, strong as ever. Original members Mauro Collina (guitar) and Alessandro Bonetti (violin) are both still on board, as is Claudio Trotta (drums), who’s been with the band since their second album; we also see the return of Luigi Ricciardiello (keyboards), who I believe hasn’t been with the band for ten years or so. With this kind of stability, it’s no surprise that the band’s style hasn’t changed much, and in this case, that is not a negative. Far from it, in fact. Their reliance on blues-based tonalities is uncommon in progressive rock, and doesn’t come off at all like an American boogie-rock band — somehow they manage to bring a creative twist to the material that is uniquely their own. This is only partly due to the outstanding technical abilities of the band members. Put it down to imagination and good taste — knowing what works, even when it’s unexpected. But rather than simply rehashing the sounds that have made them great from the start, they’ve added much more extensive instrumentation, with two saxes and a trumpet filling out the arrangements. The result is outstanding, equal to their best work, which is a high bar to meet. Does it top De Republica? Hard call there, but it’s certainly an excellent slab of inventive music, and one of the year's best.