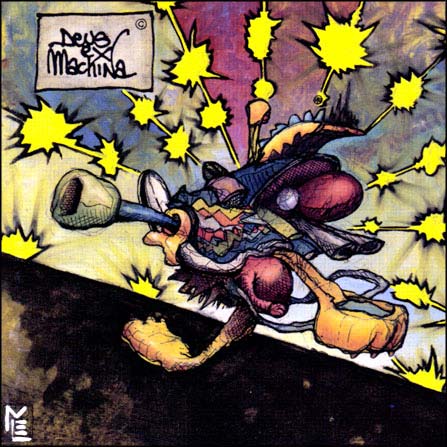 Stylistically, Deus Ex Machina is very unique and not without their share of quirkiness and idiosyncracies. Some moments remind me of a heavier Gentle Giant, others make me think of both Camel and Echolyn, but DeM completely maintains an original sound which varies from light and wistful to more straight-ahead grandiose rock. Some may have heard this band billed as Italian heavy-prog-rock, but I wouldn't use those words. Yes, it 'rocks' but no, even though there is a lot of distortion guitar, it is more grand and symphonic than it is heavy. The thing that's hardest to capture in words about this band is their sense of 'quirkiness.' As far as the players go, they are all fantastic. Obviously well-trained and practiced musicians with no shortage of creativity or inspiration. The drummer is light and quick, full of finesse and good taste. The violinist is also great, but not surprisingly, only comes to the fore in a few limited spots on the album. The bassist is the weakest of the sextet, playing adequately underneath whatever is going on, but usually settling for a supportive role. The guitarist is simply incredible. His acoustic work is a lot like Michael Hedges, actually, minus all the patented slapping and harmonics. His lighter electric guitar work rivals that of early Steve Howe (e.g. Close to the Edge era), and his heavier electric stuff is like, well... sorta like... hmmm, well very unique. And then there's the vocalist Alberto Piras. Wow! You really have to hear it to believe it. Imagine Freddy Mercury (Queen) merged with Geoff Tate (Queensrÿche) and you will have a vague notion of how Piras sounds. He's got a miraculous range, able to hit powerful high notes with full throat and chest, and hit deep and warm low notes too. He turns on and off both vibrato and tremolo with great ease and can nail some pretty wide intervals too. Most importantly, his timbre is rich and smooth and full. I can't rave about him enough, he's one of the best vocalists I've ever heard in any style of music. As far as the tunes go, two instrumentals: one solo (2-track) acoustic guitar, and the last track which is a bizarre variation of the opening two minutes of the album. seven tunes with vocals, five of which are in Latin, the other two in Italian. "Cor Mio" is the most 'commercial' tune on the album with its verse/chorus structure and that Moog-like key solo loaded with enough sus2's and sus4's to give it a very neo-prog feel momentarily. The title track is very interesting, showcasing the drummer with a satisfying barrage of drum fills at the end. The strangest and most interesting tune on the album is "Lo Stato delle Cose." Here, the lyrics are actually printed and sung backwards, if you can believe that! I guess this is some kind of joke, but the music is no joke here; very building, strong, and inspired. I believe the biggest problem with this album is the production / mix. While the recording is obviously very clean, the drums are mixed so high and in-your-face that they drown out the guitar and keyboards in some places. Places where there simply should be more guitar and keys. It doesn't ruin the album, but I am a bit surprised that they let it go with the drums so high in the mix... That said, this band is very easy to listen to, and easy to like, and I'm sure plenty of people out there who've never heard of this would indeed be impressed. If only for the vocals, it certainly deserves a listen.