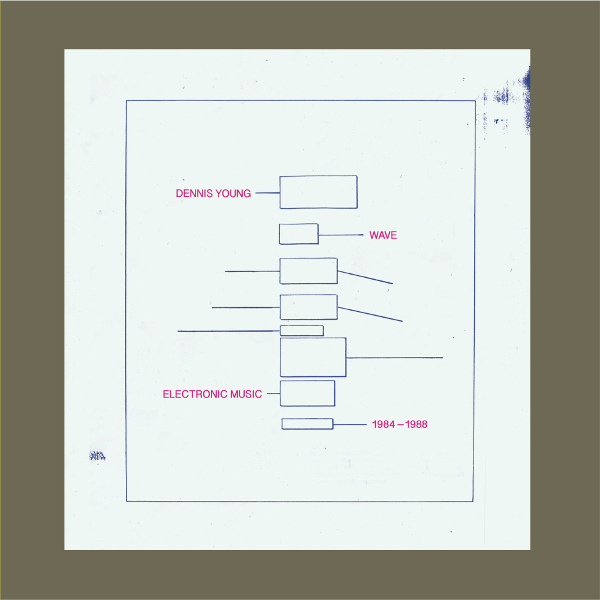 In 1983, New York City band Liquid Liquid had a hit with their song “Cavern” that was later sampled by Grandmaster Flash for his hit “White Lines” because of its strong beat. Liquid Liquid’s percussionist was Dennis Young. But he was not only a band member, between 1985 and 1989 he also produced three privately released cassettes of electronic music as a tribute to electronic music’s pioneers: Concepts (1985), Relections (1987), and Quest (1988). Dennis culled what he thought were the best tracks from these three out of print cassettes for Bureau B’s release WAVE.

Upon seeing ELP live in the late 70s, Dennis immediately immersed himself in synthesizers and electronic music, leading him to Klaus Schulze, Tim Blake, Larry Fast, Edgar Froese, Brian Eno, and Cluster. He experimented with recording directly to a reel to reel tape machine, eventually graduating to a multi-track system in 1984. He put every track through various effects boxes: delays and reverbs. Some of the tracks on WAVE are typical of the cassette culture releases of the 80s, musicians trying to emulate the “masters” but not quite hitting the mark, e.g. “Project Ozma” and “Twilight.” However, the other nine tracks are worthy of note. Most of Young’s music is sequencer driven with obvious references to Tangerine Dream and Cluster, and at times crossing over to New Age territory. He really excelled with his abstract work: “Ancient Vision,” “Interference,” and “River in the Sea.” Other tracks of note are “Spirit of the Ages,” “Empty Quarter (Rub al Kahri Desert),” and the only vocal track “Starlight, Starbright.” WAVE is an interesting snapshot of time and should appeal to electronic music aficionados.