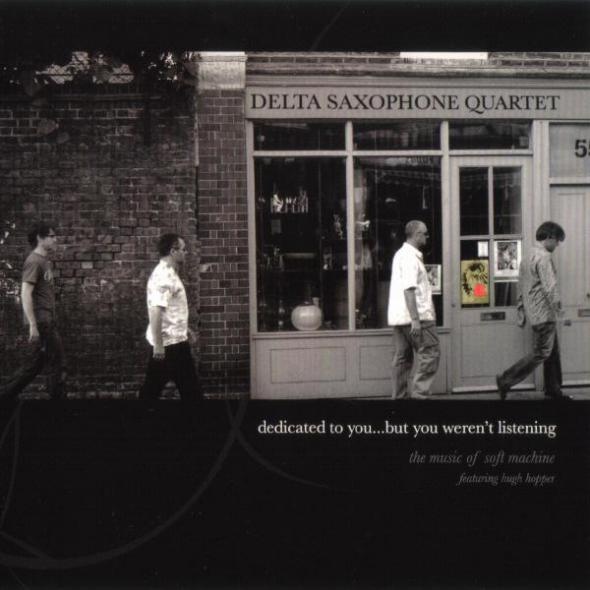 The subtle influences of the Soft Machine’s legacy are inherent in many European acts from Bill Bruford’s Earthworks to Theo Travis’s working ensembles. The Delta Saxophone Quartet hails from the London Guildhall School of Music and their all-reeds approach for the arrangements fits squarely into the vein of acclaimed saxophone quartets such as San Francisco’s Rova and other configurations such as the Kronos String Quartet. A few of the Karl Jenkins era composed songs are reprised, such as the precious childlike, “Aubade,” where a two-part horn arrangement replaces the acoustic guitar part. “Floating World” retains the surreal aspect of the original piece while the full ensemble embraces the main refrain of “The Tale of Taliesin” in a brief rendition of the track. Certain pieces come off light and airy (“Dedicated”) similar to looping work Travis has done as part of the Cipher project. Ex-Softs Bassist Hugh Hopper makes a cameo appearance on his composition “Facelift,” which stirs the improvisational pot. The woodwind section makes a convincing stab at the wonderful melodic line enhancing the obtuse phrasing that is intuitively inherent in the piece. Baritone saxophonist Chris Caldwell really holds down the bass line well with Hopper’s four string reinforcement. Musical madman Morgan Fisher’s “Outrageous Moon” is also a clever Robert Wyatt tribute in itself. Overall the CD works as a venerated mark of respect to a long lost era of experimental jazz and rock.