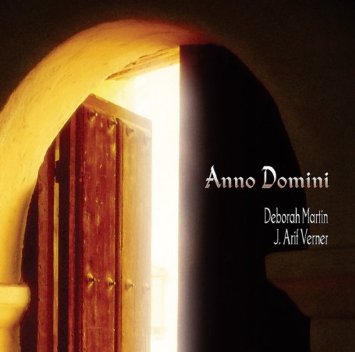 Both Martin and Verner have been regulars in the pages of Exposé over the years with their respective releases, but Anno Domini marks their first collaboration. Anyone familiar with their previous discs will have at least a partial clue of what to expect: dense soundscapes of shimmering beauty built from multiple layers of floating synthesizer, ambient guitar, occasional percussion, and loops thereof. The overall mood is dark, moody, and gothic perhaps; their music revels in reflection and introspection, with a seemingly religious undertone throughout. The surprise here is Martin’s ethereal vocals, muted, reverberating and blended seamlessly with the synth backing, bearing lyrics in Latin, floating effortlessly in and out of focus. The general feeling conveyed is one of warmth and resounding inner peace, flowing down a path to ever deeper subconscious levels, although a couple pieces bear moments that are more stark, still and cold, yet equally peaceful, and others that are more intense and commanding. Nothing here is jarring or abrupt, however; it’s a world where every sound flows together, be it subtle or powerful, yet each remains distinct in its own strata, like a painting of flowing colors in three dimensional space. At least some of the credit for this impact goes to the team of Jon Jenkins and Howard Givens for their masterful job of mixing. All taken, a magical and mysterious gem that beckons with every listen.