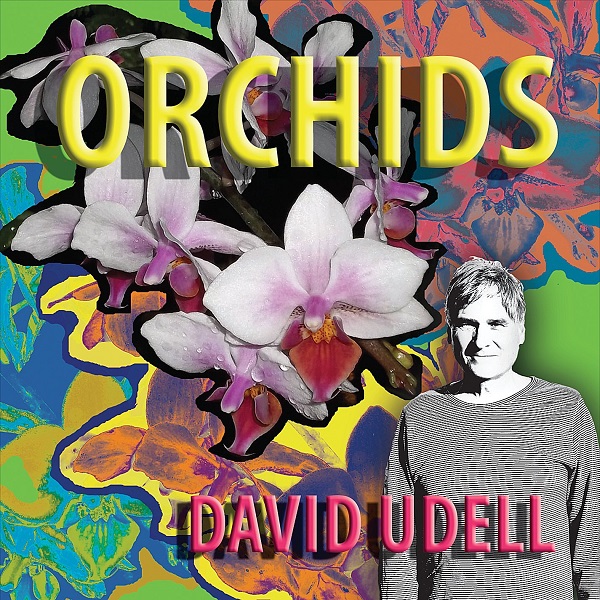 Some may remember David Udell from the St. Louis 80s art-rock band Wax Theatricks (changing their name from Earwacks before that), or from his time with the avant-pop group Delay Tactics with Walter Whitney and Carl Weingarten on their second album Any Questions?, or on their post-Delay Tactics album Primitive Earth, and several other releases with Whitney, Weingarten, and drummer Joe Venegoni, and also using the alias Phil Neon on the Submergings album with Carl Weingarten and Gale Ormiston. He’s kept a low profile all the years since, choosing to stay in the St. Louis area gigging with some of the best musicians in town, but with Orchids, he is finally striking out on his own. This is, more than anything, an album of songs – very memorable songs with thoughtful lyrics and superb musicianship, Udell singing (lead and harmonies) and playing most of the instruments (which include acoustic and electric guitars, fretted and fretless bass, keyboards, piano, melodica, celeste, banjo, theremin, didgeridoo, and more), and joined by other musicians on saxes, flute, trumpet, trombone, guitar, bass, pedal steel, keys, and additional vocals (male and female) where required. Interestingly, many of the tunes only employ light percussion, some with handclaps and such, allowing the beauty of the instrumentation to shine through the mix a bit more than if buried by a full rock drum kit. Brilliant arrangements throughout are inventive, clearly pushing boundaries and offering clever counterpoint at every turn. Songs like “All You Have To Give,” “Valerie,” “Stupid Choices,” “Tonight,” and the opener “A Lot of Roads” are immediate standouts, though there are many more waiting to be discovered as the album reveals itself over numerous listens.