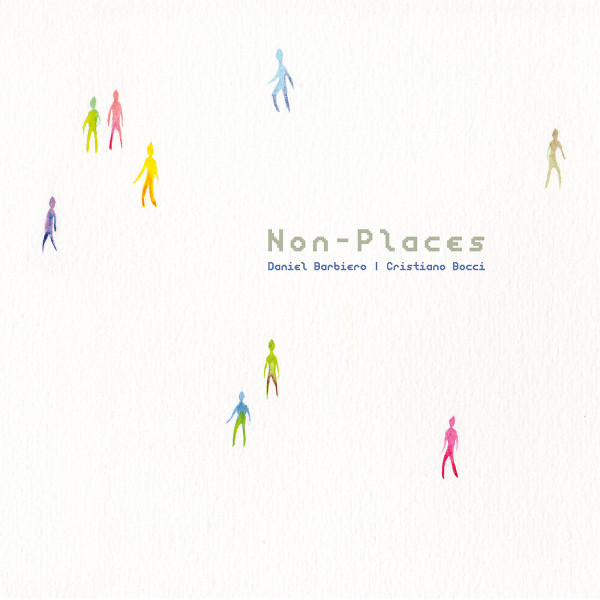 On their last outing together, these two bassists presented a highly abstract, heavily processed set of tracks on Nostos. Non-Places is also abstract and processed, but is very different in flavor. The backdrop and inspiration for the album is a series of field recordings made in various places that aren’t in themselves especially notable (hence the title), but nonetheless provide stepping-off points for these two experimentalists to do their magic. Close your eyes and visit the Berlin Subway, the train station in Brussels, the airport in Rome, 2000 Pennsylvania Avenue, and more. Woven into these soundscapes are a variety of sounds produced mostly by basses, sometimes treated beyond recognition, sometimes palpably present in more or less natural form. Mournful bowing, wandering plucked patterns, indistinct thunderous thumping, and mangled knots of screeching feedback, all come and go like passers-by in the environments. And the odd thing is that it’s remarkably listenable. It in no way resembles traditionally composed music, but there’s an internal logic to it all, a consistent sense of what sounds right, and in spite of the somewhat random nature, there are recurring motifs in each of the pieces. I particularly like the section of “Bruxelles Gare du Midi” where train sounds are looped into a rhythmic pattern and the upright bass plays a plucked improvisation that is thoughtful and expertly constructed. The limited palette of source material does not lead to a limited range of sounds. Obviously, listeners looking for structured compositions will be disappointed, but lovers of electronic experimentation should check this out. It’s fascinating both on a conceptual level and as a listening experience, and full of sounds that you’ve never heard before.