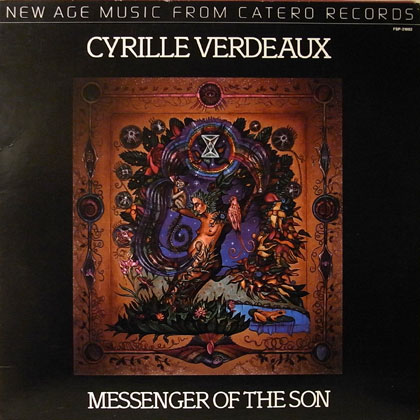 Verdeaux' name should be familiar to many, he was the main mover in the intensely symphonic seventies French band Clearlight, whose first two albums Symphony and Forever Blowing Bubbles are essential listening for any progressive rock fan who has gotten beyond the Yes, Genesis and Marillion phase. After four records (and some side-projects) as Clearlight, Verdeaux began intermittently releasing music under his own name, much of which has been regrettably overlooked. Some, like the six-part Kundalini Opera never even made it past a cassette release. One of the albums that did make its way to LP was Messenger of the Son, but released on the underpowered Catero label, it never got the distribution it deserved. This could easily be thought of as the fifth Clearlight album, as much of the music here fits more into a band sound than a solo project. Indeed many of the players from the previous edition of Clearlight are here: drummer Michel Risse, guitarist Christian Boule, synthesists Jean-Philippe Rykiel and Frederic Rousseau, and so on. Verdeaux' piano and the synths of Rykiel and Rousseau are interwoven to create the trademark wall of keyboards sound that Clearlight is known for. The difference between this and the earlier work is that it tends to be a bit more adventurous and, at least in some parts, more introspective. There are no vocals on the album proper, but the last of the four bonus tracks from his even-more obscure 1988 album Rhapsodies pour le Planete Bleue does, which sums everything up nicely at the end. Musea has done an outstanding job with the sound, but surprisingly has left the booklet (what booklet?) very lean on information. A welcome reissue that deserves far more attention.