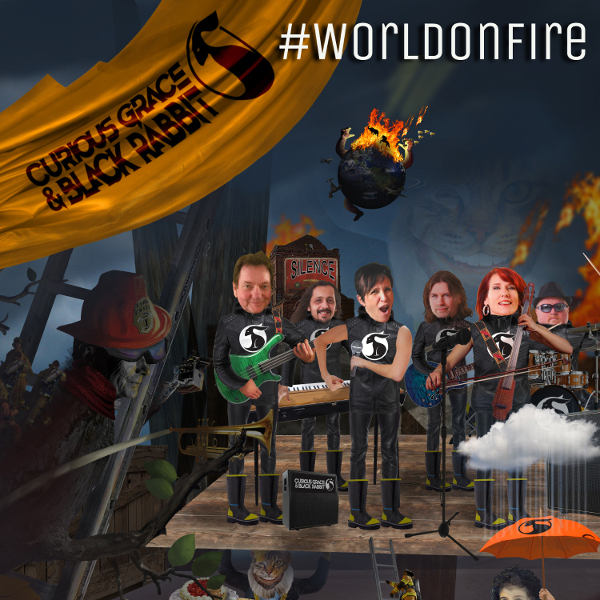 In the rock era, there have been a lot of bands to combine Irish folk music and rock, going back to Horslips and working forward through many others, including punk-inflected groups like The Pogues and American bands like Boiled in Lead and Black 47. Chicago’s Curious Grace & Black Rabbit have their own take on the style, presenting a sophisticated combination of theatrical rock and modern technology with more tradition elements. World on Fire (styled as #worldonfire in some places) is a concept album with songs centering about some of the serious problems facing our world today. It doesn’t seem to have a story as such, though there are some thematic elements that recur in multiple songs. Several of the songs can be described as rock with some Celtic elements thrown in, such as the use of harp. In some ways, I’m reminded of Schooltree’s concept album Heterotopia. Vocals are both male and female, and there’s a balance between keyboards and guitars as the backing instruments. Cello features fairly prominently on several of the tracks. In keeping with the thematic nature of the music, there’s occasionally the feeling of musical theater about the music, though not in a way that need scare off listeners who dislike musicals. Sound effects appear frequently, as do spoken words, and it is these that to my ear present the biggest barrier to excellence — for some reason, the sudden appearance of a child’s voice awkwardly reciting some lines really takes me out of the flow of the music. But that’s a relatively small caveat. If you’re looking for some engaging Celtic rock, and don’t mind a bit of social or political commentary, World on Fire is definitely worth checking out.