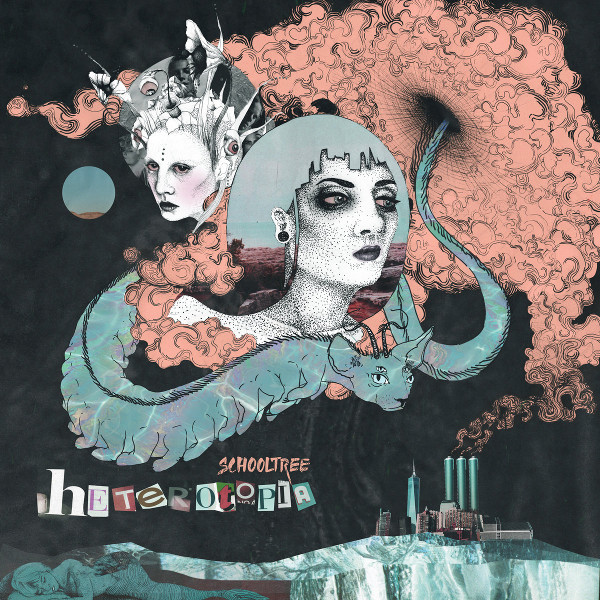 There are some who would have you believe that rock music is just entertainment, and that any attempts to make it “art” are pretentious and worthy of scorn. I am not one of those — I see no reason why it’s even a question, as there’s no reason music can’t be both entertaining and artistic at the same time. After all, there’s a reason we call them “artists.” And the highest artistic expression of rock music as art may well be the concept album. If someone says that the heyday of the concept album came and went decades ago, they just haven’t been paying attention. Artists ranging from Dream Theater to Green Day to Kanye West have tossed their hats into the ring, and Boston’s Schooltree is an example of an independent artist having a go. The band was formed by singer / keyboard player Lainey Schooltree, and has been going for a few years now. For the third album under the Schooltree name (the second to feature a full band), they have produced a full-fledged double-CD rock opera built around the story of Suzi, an aimless underachiever who cares about nothing and no one, who journeys through spectral landscapes on a journey to find meaning in life. There are superficial similarities in the story with The Lamb Lies down on Broadway and Quadrophenia, and maybe even a touch of Ziggy Stardust, as regarded through a lens of the prototypical Hero’s Journey, though musically it’s all Schooltree. The leader’s keyboards and vocals are the dominant factor in a style that’s best characterized as Art Rock. Which in this case means that while the overall idea may be high-concept, the music is fairly down-to-earth, with individual songs that work perfectly well on their own and don’t venture much longer than five minutes each. I may be imagining things here, but one way I could characterize the music is Elton John at his most sophisticated (say Goodbye Yellow Brick Road) infused with a bit of Tori Amos (Boys for Pele) or Kate Bush (Never for Ever) and some semi-progressive rock like Saga in their early days. Piano is the dominant keyboard, with organ, electric piano, and synthesizers making appearances, and there’s no doubt that Lainey is a skilled player, and mercifully not prone to showing off. Given the rock opera format, you might expect multiple singers for the parts, but she handles all the parts herself, with treatments and effects used to differentiate the viewpoints. The backing band consists of guitars (Brendan Burns), bass (Derek van Wormer), drums (Tom Collins), additional keyboards (Peter Danilchuk), and acoustic guitar and more keys (Peter Moore). Aside from a couple of tasty guitar solos, the other players are more support than spotlight, and the arrangements themselves are the highlight. The compositions strike a perfect balance between maintaining thematic consistency and providing enough variety to hold the listener’s interest. Taken individually, all of the songs are interesting and enjoyable, and taken as a whole, Heterotopia is a considerable achievement, worthy of notice outside of the band’s hometown, and a notch or two above any number of overblown prog epics from recent years that I could name.

Qoph - Pyrola – It’s been entirely too long since this Swedish band’s 1998 debut. Since that time, the band has formed their own label and started singing in English. Their basic sound is intact, however,...  (2005) » Read more