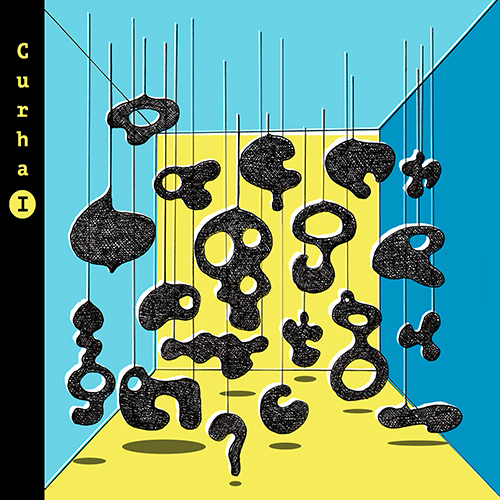 Curha is a name used by Curtis Hasselbring for his excursions into electronic music, and if you’re familiar with his other work, it might come as quite a surprise — a pleasant one, I assure you. While I wouldn’t call this jazz by any stretch, exactly what it should be called is quite unclear. And that’s not a bad thing at all. There are moments of introspective chamber rock for guitar, bass, percussion, and trombone maybe a little reminiscent of Cédric Vuille’s music; there are minimalistic electronic interludes with odd samples and warbly keyboards; there’s mutant surf rock with synthesizer bass and rinky-dink drum machine; there are times of shimmering ambient drone; and much more, with each track having a sonic identity of its own. The sound rarely approaches any kind of denseness, and there’s a light, playful touch to everything. Given the amount of guitar and played (as opposed to programmed) keyboards, not to mention the occasional trombone, it’s not fair to say Curha is an electronic project — it’s just a very diverse solo outing from a talented musician. “Madgit” subverts some of the tropes of electronic dance music, with a throbbing drum beat and stutter-edited samples, but instead of pulling from R&B classics for the samples, there’s a jazzy sax lick. “‘68” is another track deserving special mention, as it’s one that really demands my attention every time it comes on. It’s backed by strumming acoustic guitar and has a catchy melody featuring wordless vocals and whistling, but the thing that intrigues me is the rhythmic pattern, which is a very sly riff that could be analysed as alternating bars of 15/8 and 14/8. That’s the kind of thing my musical brain really latches onto. I imagine that the amount of work it took to assemble this music was significant and serious, but the result is just plain fun. Curha’s I is a welcome antidote to darkness, heaviness, and pompousness in music (and the world), and I can’t recommend it highly enough.