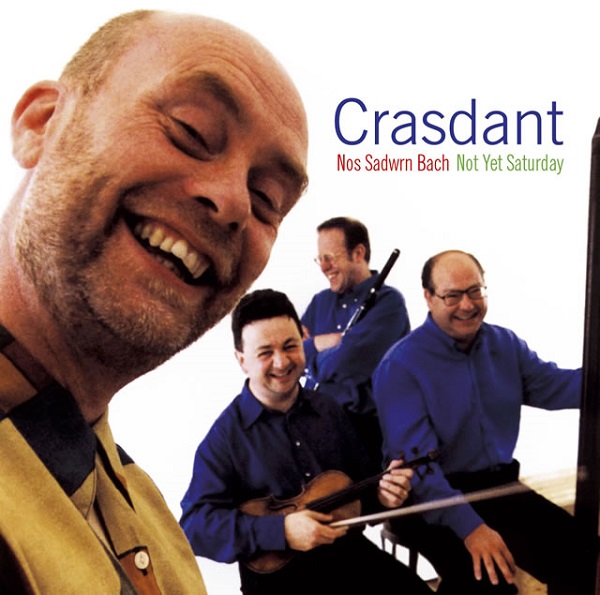 Crasdant is an all-instrumental folk band featuring four greats from the Welsh trad scene: harpist Robin Huw Bown, flautist/piper Andy McLauclin, fiddler/accordionist Stephen Rees, and guitarist/clog-dancer Huw Williams. (And, yes, you can hear Williams’ clog-stepping on several tracks.) Nos Sadwrn Bach (Welsh for Not Yet Saturday) is Crasdant’s second album. Its eleven tracks, unsurprisingly, are all traditional Welsh folktunes. Dances of different sorts — jigs, hornpipes, polkas — are most heavily represented. Among these is “Nos Galan,” the Welsh name for the Christmas carol known as “Deck the Halls,” arranged as a lively folkdance. The overall feel of the album, therefore, tends to be cheery and up-tempo — like most folkdances. Only a pair of slow airs break up the mood with a touch of mournful melancholy. The musicianship on the album is top-notch, the arrangements pleasantly diverse (by varying the instruments from track to track), and the tunes themselves have a melodic and rhythmic catchiness that should appeal instantly to anyone who enjoys Celtic music — or any sort of northern European folk music for that matter. At the same time, Crasdant doesn’t consistently achieve quite the same level of expressivity displayed by other Welsh folk bands out there (e.g. Carreg Lafar, Rag Foundation, and Fernhill). Maybe it’s just my Romantic tastes, but I feel that a bit more passion and expression are needed — especially on the faster tunes — to make this a ‘great’ folk album, rather than one that is merely ‘pretty good.’