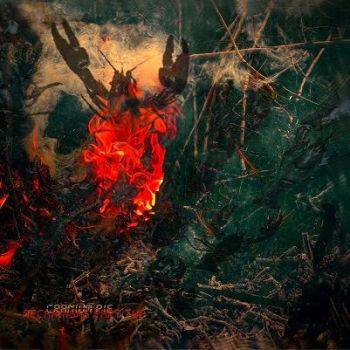 Cranium Pie return to Fruits de Mer after four years with their second full size album, this time a double slab of vinyl. Released at the end of March, the long awaited Mechanisms 2 sold out in one day! Fortunately for those of you purely interested in the music and not necessarily vinyl junkies, on April 21 the album was released on iTunes. This new double vinyl set is a very different album from their previous releases, both on FdM and other labels. The sound is harsher and more distorted, kind of an alien psychedelic approach to Lo Fi. Apparently Cranium Pie locked itself away in a bunker for the past three years to concentrate on producing music reminiscent of the late 60s/early 70s, while extending it to the 21st century. I hear Pink Floyd Echoes-era influences throughout, as well as Arthur Brown, a bit of Frank Zappa, and Krautrock, namely Amon Düül II. I also detect some influence from Pyrolator’s Ausland. On Mechanisms 2 the Pie explore the use of tapes (sped up and/or reversed), different themes/genres, rhythms, oddball lyrics, and bonkers singing. Tying this all together is the trippy organ, Mellotron, fuzzed guitars, demonic laughter, and sci-fi subject matter conveyed via the lyrics. I find it difficult to single out significant songs from the 16 spread across the two discs. Suffice it to say, Mechanisms 2 is excellent, never boring, and a great addition to their recorded output.