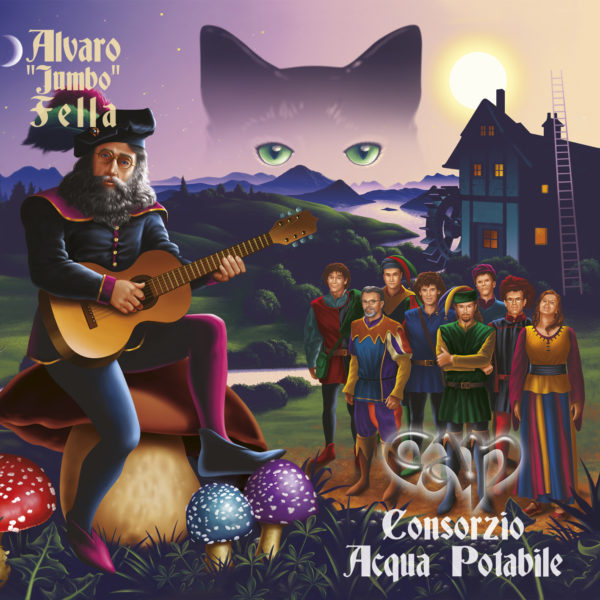 My peak Consorzio Acqua Potabile experience was their Progday performance, whenever it was (2000?). Before that point I found their albums to be good but not compelling; live they were much more immediate and of course they ended their set with a PFM cover. I felt the same about the album of the time, Robin delle Stelle, it got a bit more play due to the show, but as time moved on I was still a bit above lukewarm on it, it didn't really quite capture the live feel. And so after this I never picked up their CDs and didn't hear any buzz that made me feel different. But then the news comes that Alvaro Fella from Jumbo was joining CAP for their new album. Fella to my ears is one of the greats from the 70s, a tremendous, iconic singer, and maybe something of raconteur, someone who was good when fronting something heavy and angry, and also good when bringing out an acoustic and doing folk. Here he has certainly energized the music of CAP in a huge way and he sounds exactly like you last heard him, with the first track literally jumping out of the speakers like a tiger unleashed from its cage. Coragio e Misterio is a 70s-era double length album and so it's a bit exhausting as a first listen if only because most of the material is truly excellent. Fella hasn't completely taken over the vocals either, which allows for a lot of diversity and the album's quite a journey through so many moods and feels. Fella growls, goes bluesy, and lets out that trademark laugh, bringing out the type of individual personality only the very best vocalists have and the band seems really inspired behind him. The music is definitely right in the RPI vein but at times it veers a bit straighter than that and it also takes a lot of cool chances. It's really been a banner year for Italian progressive rock, both AMS and Black Widow have been doing even better work than usual.

Consorzio Acqua Potabile (CAP) is an Italian progressive band that formed in the 70s, eventually releasing a handful of albums starting in the 90s. For their latest they teamed with Alvaro “Jumbo” Fella, vocalist for the short lived 70s Italian prog band Jumbo. To rejuvenate the band, Alvaro tasked CAP with writing songs about Courage and Mystery, hence the album title. The result is eight songs, most of them featuring Alvaro’s raspy vocals. I am unfamiliar with CAP’s previous albums, so I am at a disadvantage when it comes to comparing Coraggio e Mistero to their earlier work. What I can say is despite the intricate arrangements, use of vintage instruments, and Italian prog themes, I find their music somewhat off-putting. I really cannot put my finger on why. Perhaps there are too many shifts in focus, or the melody lines do not engage me, or perhaps it is Alvaro’s vocals. Also the cover art belies the listening experience. I was expecting something fantastical, gentle, and bucolic. The only track that I did find interesting is the mammoth 21 minute “La Notte e il Mulino di Al.” This dark song features lots of organ and guitar interplay, different movements, an acoustic guitar and flute interlude, and ends with sounds of women meowing, screaming, and evil laughter. Of course, no Italian prog album would be complete without a liberal dose of Mellotron and occasional jazzy vibes. Another track, “Tra le Scale e il Cielo,” approaches theatrical prog, similar to Osanna. This album may improve on repeated listenings and be an acquired taste.