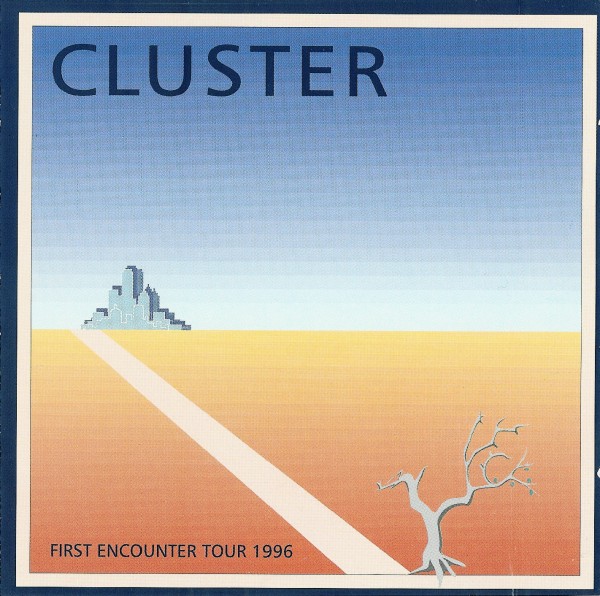 I’m truly listening to live recordings from the nearly legendary inventors of German minimalism on their first tour of America? I’m truly dumbfounded! It was hard for me to grasp that Moebius and Roedelius would venture out from the safe haven of their native homeland to tread across the wide expanse of the USA, doing only what they can do with their unique electronic chemistry and relationship. I’m also indebted to Brad Owen for convincing me to attend the quickly added show in Santa Cruz at Palookaville where I was astounded at the dynamic interworkings of two innovators using only two racks of keyboards and a set of perplexing , but intense facial expressions. The First Encounter Tour discs are a slice of 13 tracks across 11 cities which capture the duo in the act of live improvisation much in the vein of mid-period Tangerine Dream (circa Ricochet). The sonic results aren’t as dark or ominous as their contemporaries though. Some modern sampled hip-hip style percussion provides backdrop over the artist’s canvass as both paint texture with the ease and confidence of their recorded studio legacy. Tempo is not the sole setting which is cleverly handled however. Sound texture and timbre are also expertly manipulated with expressive consequences. Track lengths vary from over 30 minutes to less than three. "New Orleans Louisiana" invokes a variation on a theme from one of the Cluster / Eno albums, a very serene exploration. Whether you purchase this disc as an introduction to Cluster or as a tour souvenir, I’ve personally enjoyed several engaging hours of synthesized listening and I hope you have the courage to venture to do the same.