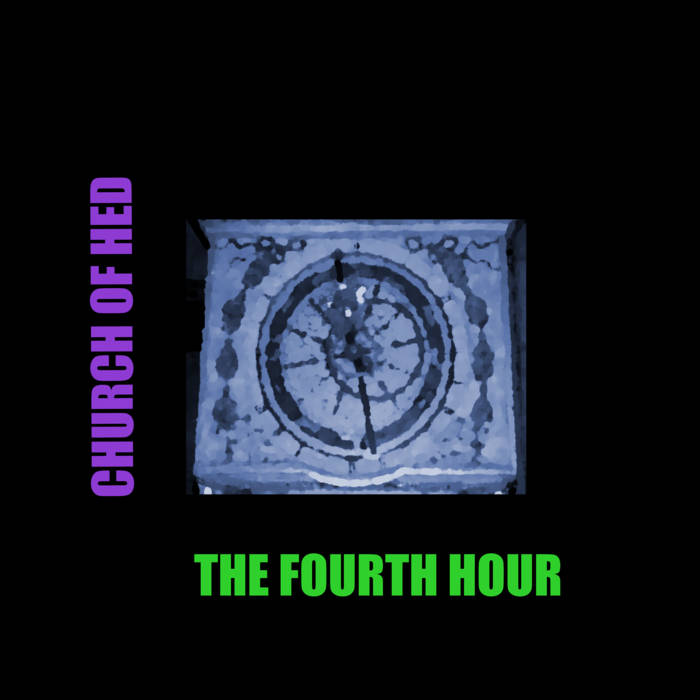 Church of Hed is the solo project of Quarkspace drummer and synthesist Paul Williams, and The Fourth Hour is the latest in a long string of albums (not the fourth, in fact it’s the seventh by my count), and this time it’s only being released as a download. Of course, that’s always subject to change, and at around 40 minutes total it would make a perfect length for an LP release someday. There are five long tracks here, and this time it’s a bit more wild and improvisational than the previous few COH releases, mining that rich and fertile sonic zone known as psychedelic spacerock, moreso than the Berlin electronics of his recent endeavors, but Williams is right at home here, and on most of the cuts he’s working with bassist Stan Lyon, the result is a bit reminiscent of the Quarkspace Spacefolds series. Right out of the gate we have “Q Ching,” an intense groover with a strong melody that continues to develop and blossom over the tracks near-nine minute duration; at around the four-minute mark we start to hear some repetitive spoken word part about “fertile soil,” followed by other spoken parts, contributed by the certainly fictitious Sir Winky Stimplebean (possibly Williams himself?) which gives those sections of the track a kind of Hawkwindish flavor. “The Ruler Does Not Travel” is a bit more synth-dominant, with layers and layers of electronic color building as it goes, eventually resolving into a steady persistent groove. “Avoiding the Beach” is an interesting extended vignette, a mix of color and chaos, layered with care, and it’s the only cut here that doesn’t feature Lyon. The title track moves briskly, a melange of driving percussion, blasts of synth, and a powerful undercurrent of electronics and bass, this time with spoken words by another fictitious female Louisa Rhys-Stigmuffin, but not really high enough in the mix to be understandable, though it’s still very effective. Somewhere in the timeline we get to “Leave the Salad in the Desert,” borne of deep dark repetitive pulses and swirling synth textures and dweedles interwoven with it. Overall the five tracks included comprise a powerful statement as well as exposing a well of new ideas worked into a serious grooveworld.