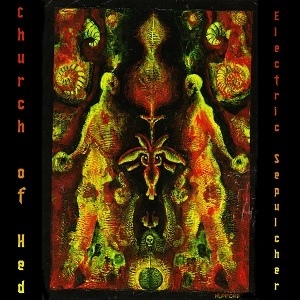 Paul Williams is the drummer, synthesist, and producer of Quarkspace, but with that band now seemingly in hiatus (their next regular album was supposed to be released in 2010, but never was, although their excellent Spacefolds series of band improvisations, now numbering a dozen, continued through 2013) Williams’ primary outlet is now his solo electronic project Church of Hed, of which Electric Sepulcher is the third release. While the compositions on the nine cuts herein are clearly in the progressive rock vein, the arrangements are more informed by space rock, Berlin school electronica (Klaus Schulze, Kraftwerk, and Neu! most prominently), as well as American synthesists like the late Michael Garrison. Much of the material is textured and built upon layered sequences, with shifting and dreamy melodies simmering above it all. Then again, of the more ‘space rock’ oriented material, “House Tron” will provide the listener with a solid example. Being a drummer as well as a keyboardist (yes, Klaus Schulze was also…) Williams' electronic drum kit fits in well with the all-electronic arrangements, yet provides a certain distinguished percussive sensitivity that seems to be lacking in the work of many other keyboardists who don’t have that same background. The title track seems to explore a more avant-garde path that might fit in well in the motion picture soundtrack realm, with it’s dark and menacing underpinnings, and yet all the while finding a sensory groove that moves forward steadily as the piece proceeds through its seven minute duration. Farther out from that, we have “Godspeed You Alien Dingo” that opens with its bubbling textures swirling above and below the less active washes that flow throughout that part of piece, eventually settling into a sequenced pattern with melodic piano highlighting the journey, eventually morphing into the structure of the piece while lush sequences and soaring synth dweedles continue throughout. If you miss the old days when electronic music was progressive and innovative, and not just a brain-dead wallpaper of 4/4 dance beats, then Electric Sepulcher is definitely worthy of exploration.