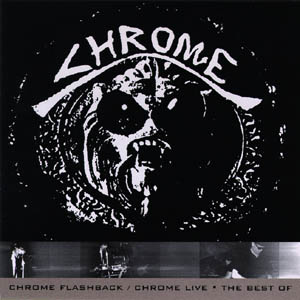 When I first heard Chrome back in the early 80s, my initial reaction was “Ouch!” All I heard was a wall of distortion and mangled vocals – their brand of art-punk was too much punk and too little art for me. Now, almost twenty years later, Chrome doesn’t seem so extreme, and in fact need more hyphens than art-punk contains. Industrial-space-art-goth-punk is more like it. They invented a genre all to themselves, combining raw guitar, tape manipulation, and sci-fi themes. Many others have come along afterwards, borrowing pieces of their unique sound, from Nine Inch Nails to Sonic Youth to later incarnations of Hawkwind. Guitarist Helios Creed and keyboardist Damon Edge were only together from 1977 to 1982, but they produced more than seven albums’ worth of material and developed a sizable cult following. The last few years have seen virtually all the band’s work re-released on CD, including 1982’s Chrome Box set (now a 3 disc set), which includes the majority of the band’s output by itself. The Flashback half of this set serves as a sampler for the box, presenting many of Chrome’s better known tunes, fairly evenly distributed through their history, and as such is a good introduction for the Chrome novice. As an incentive for the Chrome aficionado, there is the second disc, a live recording from 1998’s reunion tour, which included only Creed from the original lineup, helped out by some of his newer cohorts. My main criticism of this collection is the lack of credits, failing to detail the origins of the individual songs or the changes in personnel through the tracks.