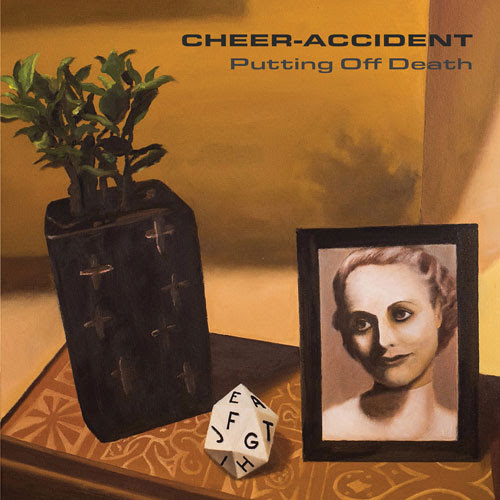 It’s been a few years since we had a new release from the weird and wonderful Cheer-Accident — No Ifs, Ands or Dogs came out in 2011. Multi-instrumentalist Thymme Jones released a solo album called The Goal of Action Is Contemplation in 2014, but I was beginning to wonder what happened to the band. Putting off Death is similar to its predecessor in terms of crazy stylistic variety, impressive musicianship, and beautifully warped artistic sensibility. “Language Is” is the lead-off track, an 11 minute piece that starts with a meditative piano and vocal section lasting a bit over a minute and then adds in drums with unobtrusive bass and (I think) a little guitar. Then suddenly at 3:39 a totally different section cuts in without warning or even being on beat, almost as if a second piece of music was waiting in the wings and could no longer stand being denied. This section is faster and more aggressive, with a complex rhythm and chords that stack up into ambiguous masses of notes. After a couple minutes of that, there’s a section of long tremolo chords that slowly builds with indistinct sounds buried deep in the mix. There’s another section where horns join in. The piece ends with studio trickery, messing with the signals, throwing out white noise and mangling the audio. The other tracks are shorter, but similarly varied in style, rhythm, instrumentation, and mood. Vocals are superbly arranged, with multiple singers tackling difficult parts in a similar way to Thinking Plague, though perhaps more accessible. Jones sings and handles keyboards, drums, guitar, and trumpet, with nine other instrumentalists and three singers contributing. The band seems to consist primarily of Jones and fellow multi-instrumentalist Jeff Libersher (vocals, guitar, keyboards, trumpet) along with all the others filling out the horn section and extra vocals. Their anything-goes attitude provides for a fascinating kaleidoscopic artistic experience, reaffirming their place as one of America’s best art rock bands and contributing another great addition to their impressive discography.