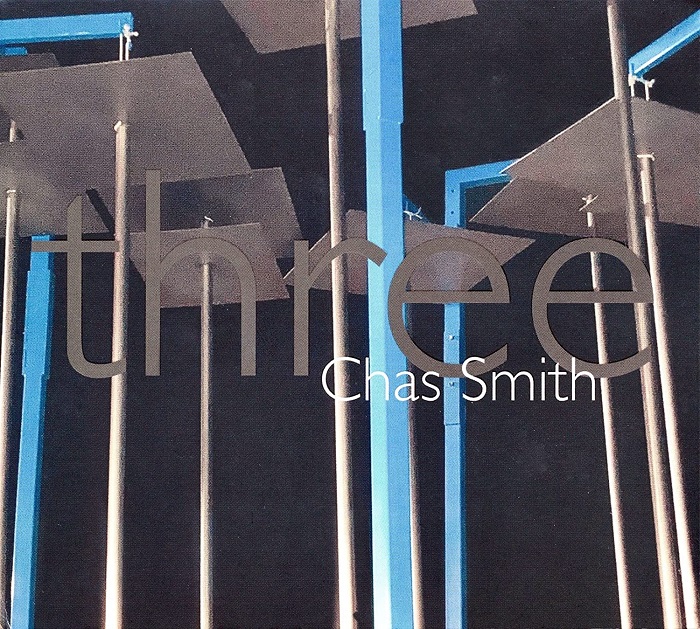 Chas Smith is primarily known for his unique instrument creations and the recordings he makes with them, as well as being an in-demand pedal steel player, and a collaborator with the likes of Harold Budd, Thomas Newman, and many others, plus his work on numerous soundtracks. One could think if him as something of a modern day Harry Partch for his instrument creations alone, but he’s done much more, and has been actively making recordings since the beginning of the 80s. He has recently relocated from his former home base of Los Angeles to the relatively quieter domicile of Grass Valley, northeast of Sacramento. Three is not his third album (probably his tenth by my count), but a collection of three pieces of recent vintage that conceptually fit well together, each with its own character, and using many of his home-made exotic instruments (four are shown on the six panel CD jacket, more can be found searching the web). He gives the instruments odd names that don’t necessarily offer a clear vision of what they sound like, but on Three he uses JrBlue, Guitarzilla, Pez Eater, Bertoia, Lockheed, Sceptre, Que Lastas, Parabaloid, Towers, Replicant, and of course steel guitar. All three pieces are effectively each the length of an LP side, and offer sonic constructions that are ‘floating ambient’ in nature, but there are no synths or conventional electronics here, the instruments are mechanical devices that seem to be bowed or struck, and offer a long sustain, sometimes seemingly looped. “Distance” is the opener, a gently swirling vortex of sound that appears to be at least partially the result of bowed metal, though one can’t be sure; the result is a gentle calming effect on the listener. Next comes “The Replicant,” which showcases the instrument of the same name, offering a bit more of an industrial sound, but no less compelling from the standpoint of a listener. Closing the proceedings is “The End of Cognizance,” which starts with struck metal producing bell like sounds that seem to have an infinite sustain, working like waves that drive a beautiful and cavernous sonic universe. If one loves mysterious ambient soundworlds, Three should be definitely be of interest.