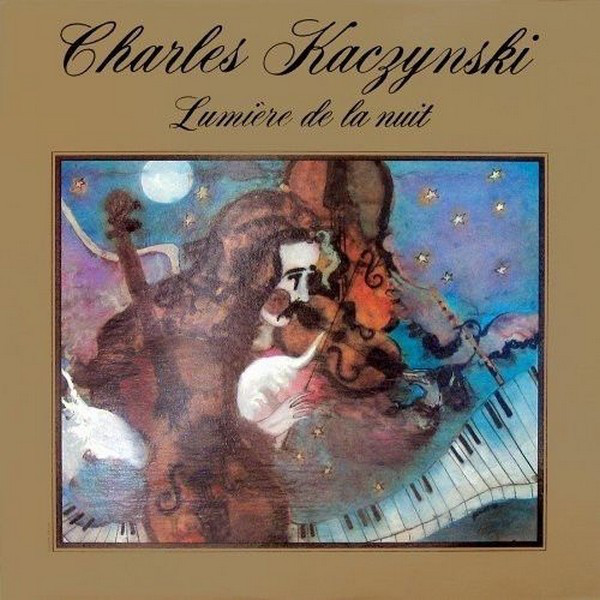 Canadian violinist Charles Kaczynski produced one of the most heavily orchestrated one-man efforts I’ve ever heard. In addition to violin, he covers viola, cello, acoustic guitars, various kinds of flute and recorder, vocals, piano, organ (the only electric instrument), and some percussion. The album is notable for its lack of a drum kit, lending it a stronger pseudo-classical feel than many works with similar melodic and harmonic content. The album’s fifteen mostly brief tracks run together into a near seamless continuum of beautiful folk-inflected music. Parts of it, in fact, border on melodramatic New Age soundtrack fluff, and some of the massively overdubbed vocal parts remind me of a male Enya singing in French, backed by a string ensemble rather than synthesizers (and with less reverb). Parts of it, such as “Eveil du soleil,” are so festive sounding they could be Christmas music, or perhaps the background music for a holiday play. My favorite parts are where he works in some tension by departing from the straightforward harmonies and flirts with dissonance, or on “Liberté” where the tempo picks up and he lets fly with a pretty intense violin solo. On the whole, it will mostly appeal to fans of mellower symphonic rock-inflected (though not actually rock) music, and while it is amazingly well executed, it’s a little too polite and mannered to get my highest recommendation.