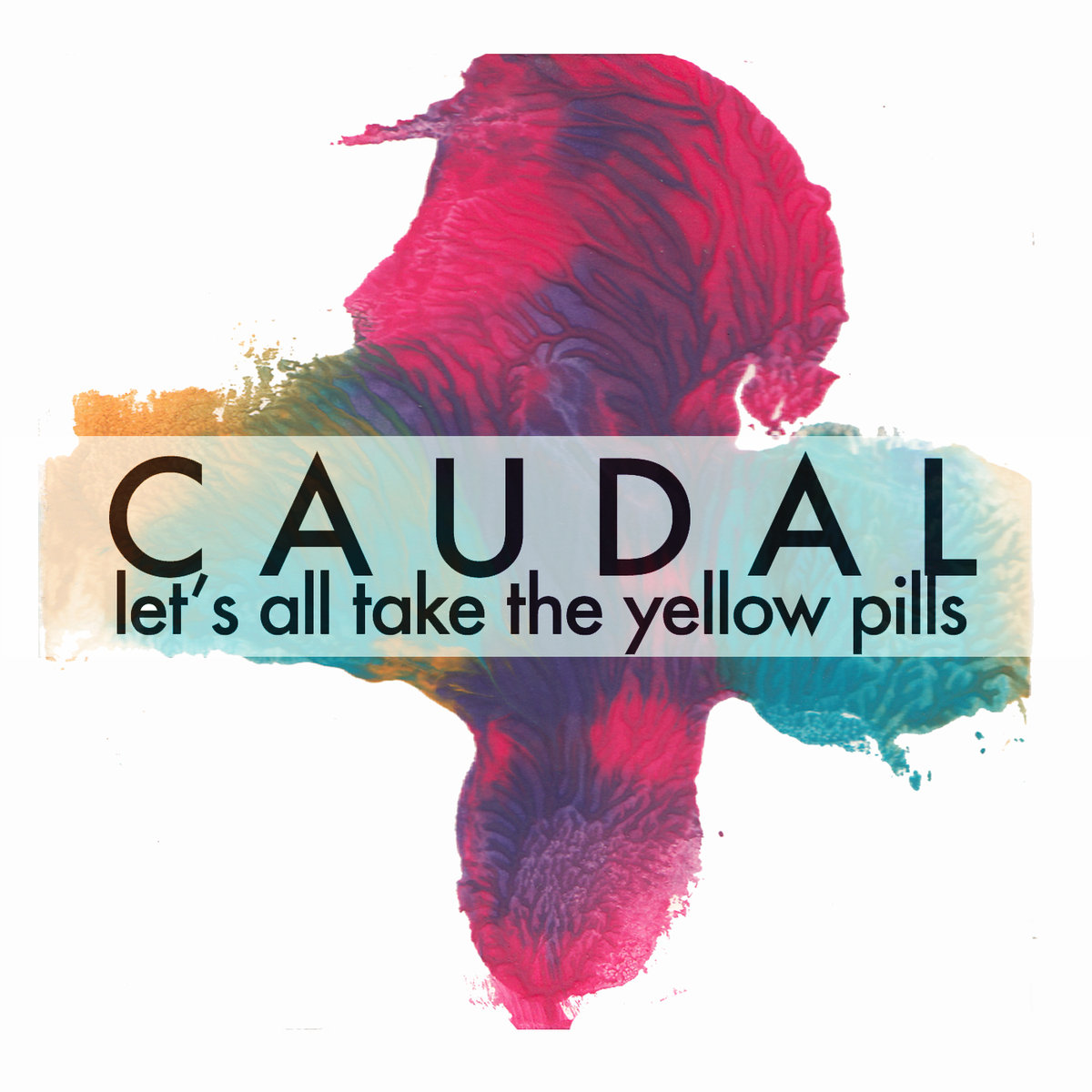 Or should that be Let’s Take All the Yellow Pills? I hadn’t heard of Caudal before, but I’m familiar with their guitarist Aidan Baker, from Canada, who has about eight dozen albums to his credit, between solos, collaborations, and with his group Nadja… we’ve reviewed a few of both, those that were released on the Beta-Lactam Ring label. Caudal (as well as Baker) is based in Berlin now, and is a trio featuring Irish bassist Gareth Sweeney and Colombian drummer Felipe Salazar. They have three full length releases as well as three EPs (of which this is counted among, even though it’s playing time is almost 36 minutes) and three live releases one can download. The original physical release of Yellow Pills in April 2016 was a limited run of 100 CDs, each one with unique artwork. So this Kapitän Platte release is technically a reissue, a 12-inch vinyl, a limited run of 300, the first 100 on colored vinyl. We have here three long tracks that call forth the spirit of Harmonia or Neu! on one hand, and maybe Ozrics or early Hawkwind on the other, although none of this is as flashy as the latter, more in keeping with that trancey propulsive groove built up between Salazar and Sweeney, with Baker adding layers and layers of spacy guitar that grow in intensity, and eschewing vocals altogether. The three long tracks seem to be rooted pure improvisation, but these guys know how to do it right. The eleven minute “Piqued” opens the set, which fades up slowly as a solid space-rock groove is established and the parameters are set when Sweeney’s bass joins in, with Baker’s echoey looped guitar almost reminding of A.R. & Machines. The second cut, “Dissolute,” clocks in at well over 17 minutes and goes through several distinct stages, starting with a cool and lazy bass figure that evolves as it the guitars are multi-layered on top, again built on extended loops, building up slowly, then at around the ten-minute mark it all shifts into another gear, with some noisy guitar textures twisting through it all, for another seven minutes of driving bliss. Almost seamlessly, closer “Ion” retuns to the bass driven propulsion that gently rocks onward and fades into the dark. A great release that would be wonderful in an endless loop; you can download it any time from their Bandcamp page, but if you want the colored vinyl you’ll probably need to move fast.