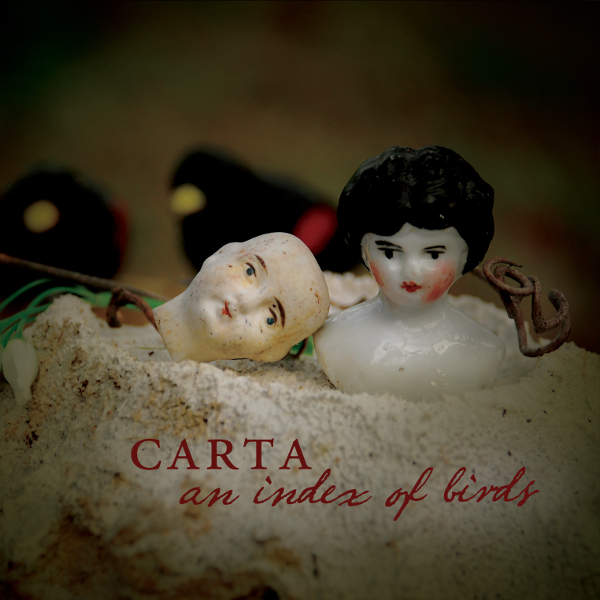 Carta hail from the S.F. Bay Area and currently consist of Kyle Monday (guitar), Sacha Galvagna (bass, keyboards), Ray Welter (guitar, keyboards), Gabriel Coan (drums, electronics), Jason Perez (bass, guitar, electronics), and Raj Ojha (drums), with Alex Kort (cello) and Lorealle Bishop (vocals). It’s an eclectic lineup that doesn’t reveal all its potential on this sophomore effort (their debut was 2007’s The Glass Bottom Boat). Instead most of these 13 tracks focus on interlocking guitars set against drums and bass with a distinctly post-rock / shoegazey introspection. Think Oceansize but toned down several notches. Most of the songs are instrumentals, with the occasional vocal handled either in a subdued semi-murmur, as seen on “Building Bridges,” or in a primal therapy caterwaul (“Back to Nature”). At times the emotional numbness in the songs gives way to something more forceful, like when everything erupts toward the end of “Sidereal,” or in “Descension” when Ojha’s rolling percussion elevates Bishop’s redemptive vocal. This is a band unafraid to push into more experimental territory, as on the Eno-esque “Bank of England” or “Hourglass,” that features cello to enhance the moody introspection. A definite break from form comes on “Who Killed the Clerk?” which can even be described as rocking. Some may see Carta as just another purveyor of aural melancholia (lines like “You’re goin’ home in an ambulance” might have something to do with it) though I see them in the same light as Kevin Moore’s minimalist solo work or some of Eno’s seminal 70s recordings. As usual your mileage may vary.