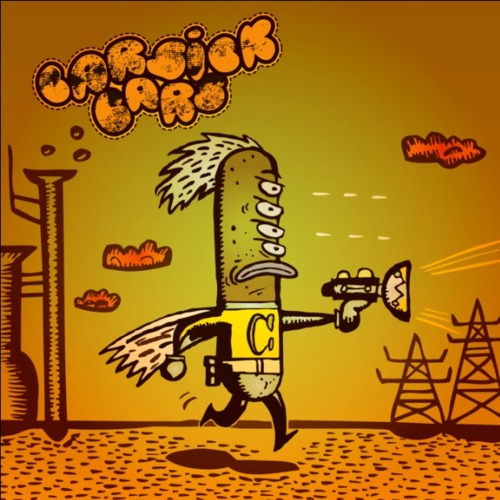 These two closely related bands represent Beijing's current underground rock scene quite nicely. Both are trios, and they share two musicians: Li Weisi (bass) and Li Qing (drums in Carsick Cars, guitar and keys in Snapline). The Cars are rounded out by Zhang Shouwang on guitars and vocals; Snapline adds Cheng Xi on vocals (and drum machine programming, I think). Like many Beijing bands, they share a fondness for noise, though it manifests in very different ways. The Cars can be roughly thought of as taking after Sonic Youth, with walls of guitar (though considerably less on this album than you'll hear in a live setting). Vocals are a secondary consideration, more yelping and screaming than exactly singing, but surprisingly melodic when presented here. The producers have wisely focused on the more tuneful side of the band, and the result is quite listenable and catchy. The lyrics run 7/3 Chinese / English, though in many cases they’re pretty minimalistic, as on "Zhong Nan Hai," named after a popular brand of cigarette, where he mostly just repeats the title. On several tracks, they drift into long hypnotic riffs, reminding me (probably unintentionally) of Hawkwind in a noisy mood.

Snapline puts much greater emphasis on the vocals. Cheng Xi has a delivery a little reminiscent of early David Byrne. Li Qing's guitar playing is more overtly avant-garde and less rock oriented than what you hear with the Cars, though she has the good sense to play conventional sounds at times to keep the tunes moving along. Drums are unapologetically artificial, going for an esthetic a bit like early Ultravox crossed with Thrill Kill Kult, if you can imagine that. The lyrics are entirely in English, and sung in such a way that the accent is not problematic, though there is an occasional odd turn of phrase. Both CDs feature unusual packaging, with the artwork printed and stuck directly on the jewel cases rather than on paper booklets.