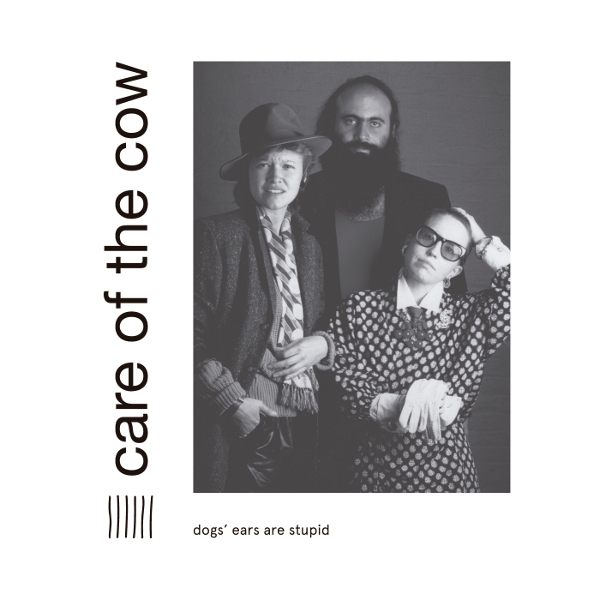 Care of the Cow was a trio based out of Chicago in the early 80s who played a fascinating blend of psychedelic folk, minimal electronics, and post punk weirdness. Their second album, Dogs’ Ears Are Stupid, was released only as a limited edition cassette in 1983. Afterwards the band broke up and went their separate ways. Guerssen is now reissuing this lost gem of 80s underground music on LP and CD. Care of the Cow was Victor Sanders (electric and acoustic guitars, Roland Drumatix, and bass), X Baczewska (vocals and Electro-Harmonix minisynthesizer), and Sher Doruff (vocals, electric guitar, Pro-One synthesizer, Casio VL Tone, Roland Drumatix, clarinet, and concertina), whose influences were as diverse as The Beatles, Robert Fripp, Brian Eno, Joni Mitchell, Carla Bley, Pauline Oliveros, and Eric Dolphy. One aspect of their music that stands out is the beautiful vocal harmonic textures featuring both X and Sher. Their vocals are clear, accompanied by fuzzed guitars, synths, etc. And every once in a while they throw in a surprise like a few phrases from “Sentimental Journey” at the end of “Chinese Food, Part I.” There is also the inventive experimental track “No Beethoven” that is a combination of spoken word and wordless vocal harmonizing. Victor composed this song, and according to X, Victor “schlepped me into the vocal booth and told me to sing against the Beethoven recording. Then he took everything out of my headphones and made me sing track upon track!” So literally there is no Beethoven in this song, just her vocals. In my opinion, the best tracks are “Chinese Food Part II” that bears a resemblance to the Young Marble Giants, the warped-dub “Oceans in My Ears,” and the excellent psych / prog jamming of the closing bonus track “Dancing Partners.”

Related artist(s): Care of the Cow

How Many Voices Does the Wind Have?