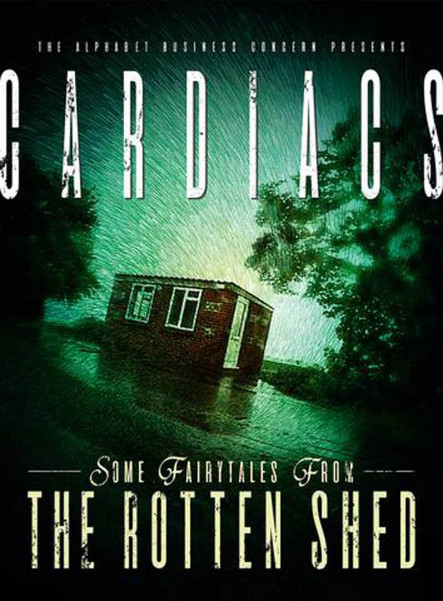 I had heard a few early Cardiacs albums before I came across a rather shaky video of the Surbitan Assembly Rooms 4/18/85 show. This was the trigger moment for me, I mean it was obvious from Sing to God that this was a talented band with an original vision, but the show introduced me to their history. You're left to describe the sound and impressions afterwards, all of which describe a series of contrasts: the tricky stops and starts of complex progressive rock with the manic energy of punk, the feel of epic symphonic music with the pogoing songwriting of the best anthems, the almost claustrophobic tension with the strangest of humor — everything about the Cardiacs seems to be about magical collision. And the show made me a fan even though I was practically squinting at times to see what was going on.

The Cardiacs have released what is part rehearsal video but also part art installment. Some Fairytales from the Rotten Shed was their last line up, the two-guitar quartet that recorded The Special Garage Concerts CD, which was essentially the band going back to their earliest material, a period of music mostly written a few years prior to the Surbitan Assembly Rooms show. There is a lot of crossover between the live shows and this rehearsal video, but as always with the Cardiacs, there is something magical about what happens when you get the visuals. Not only are you introduced to one of the tightest bands on the planet, a machine driven by the almost insanely paced drumming of Bob Leith, but you are also privy to what can only be described as somewhere in the middle of documentary, satire, and play. Tim Smith yells "Jim!" multiple times through several songs. Jim sits in a chair in just in briefs, seemingly fighting off a cymbal half the set. During one moment the band waits patiently as he slowly attempts to replace the cord back into the bass, a farce that gets more tense and more hilarious as it seems to go on for minutes. Between songs, sometimes during songs, various voices shout as if they are inner insecurities coming to life. Kavus Torabi hilariously considers his later addition to the line up. Jim Smith is interviewed interstially in some bizarre uniform. Tim Smith erupts into screaming or muttering at times. Conversations break out, both about the songs while acting as parts of them. It's all the way down the rabbit hole and it is impossible to look away.

All of it of course is tied down by manically energetic playing. Riffs start and stop and spike, sometimes racing off at breakneck speed, songs often end when you least expect them, almost giving the illusion that it's all a sloppy mess when it's really the opposite. Tim Smith leads the vocals, but Kavus and Jim will join in to sing the anthems, and then later they will mesh different lyrical lines to incredible effect. The absolute jagged and manic nature of the propulsion gives the impression of a train going off the rails even though it never quite does. All of it is just so tremendously exciting you can't even wait to see what the band will all do next. It all seems to end as their manager is on the phone outside the claustrophically small little building the band is crammed in, making noise and yelling incomprehensibly. Don't be surprised if you realize you had been gripping some piece of furniture. Stunning just doesn't tell the half of it.

Anekdoten - Gravity – The most distinctive things about Anekdoten have always been overdriven bass, Mellotron, cello, and the vocals. This CD answers the question of what happens when you remove two of those elements,...  (2003) » Read more