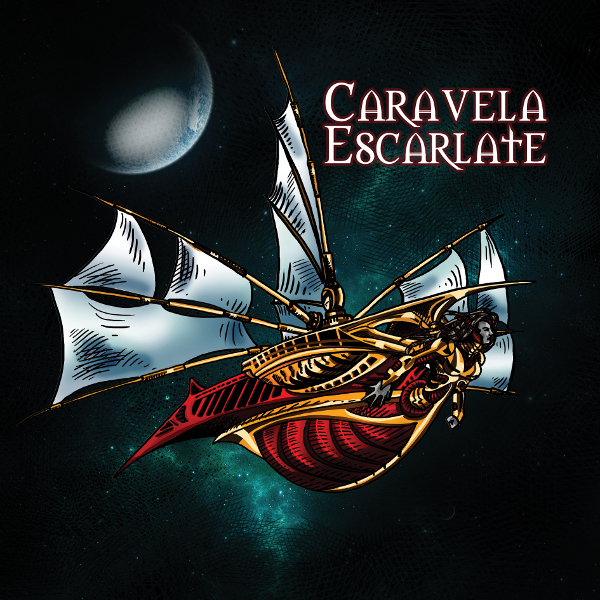 Caravela Escarlate is Brazilian band in the classic tradition of keyboard trios, Emerson Lake & Palmer being the prototype (or 1-2-3 / Clouds if you want to go a little earlier and less well known), along with Triumvirat, Egg, Ars Nova (the Japanese one), and a host of others. Ronaldo Rodrigues is the keyboard player here, with Elcio Cáfaro on drums and David Caravelle on bass. As with ELP, it’s the bassist who sings, and he also contributes occasional guitar and violin. The keyboard instruments run from vintage sounds like Hammond organ, electric piano, and Mellotron to a wide array of synthesizers, and while Rodrigues is solid at all times, I wouldn’t say he’s a flashy player along the lines of Keith Emerson. Not to say there’s any lack of technique, since his playing is quite dextrous at times, just that the tracks are not arranged to showcase blazing solos. One passage I particularly enjoy is on the track “Atmosfera,” which starts with a nice, simple arrangement for electric piano, bass, and drums, without any overdubs piled on. It’s a nice touch, and shows that the musicians aren’t afraid of getting down to basics. After this introduction, the piece moves into a great synth solo, again with relatively minimal backing. So many bands in this sphere always tend to overdo things, piling on more and more parts, and it’s refreshing to hear a band willing to let the music stand on its own. In the ranks of progressive rock keyboard trios, probably Refugee is closest to Caravela Escarlate, though Caravela’s vocals are better. I would also recommend this to fans of classic Italian prog, as there’s a similarity in compositional style that’s a little hard to pin down. This is a great album for fans of keyboard-dominated prog, and while it breaks no new ground, it’s exceptionally well done, and a fun listen.