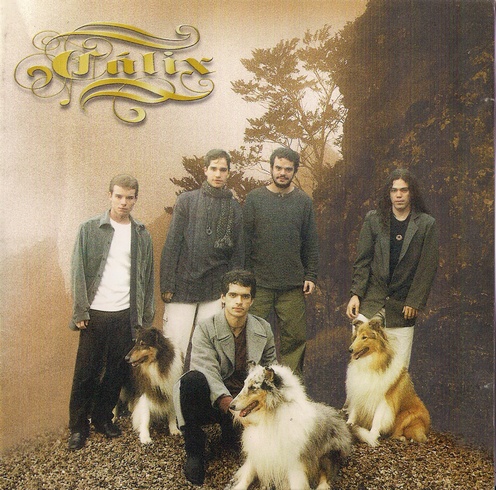 Cálix is a young Brazilian band that seems to strive for an early 70s rock sound as opposed to strictly prog, with easily grasped melodies and song structures, and a dominant Anglo-American feel. Chord progressions, melodies, rhythms, and leads are rarely unusual, sticking more to the tried and true. The disc starts on a very high note with “Dança com Devas.” I can’t get Horslips out of my mind here due to its lead vocal and flute, rhythm mandolin, and its uplifting seafaring melody. Ditto for “O Sonho.” Other instruments are the standard guitar, keyboards, bass, and drums, with prominent acoustic guitar, piano and soloing flute. The only other keys of note are some occasional Hammond flourishes. The tones are very nice, though they certainly could stand a bit more bite occasionally. Track four, “Kian,” is the first track with an ethnic tinge. It has a cool choral vocal line and is ultimately one of the high points of the album. Low points are “Nao Se Lebram Do Que Sao,” which starts like latter-period Caravan before the awful “ba-da-da-ba-da-da” pop chorus, and “No More Whispers”; good English pronunciation doesn’t save this unfortunate 38 Special-type southern rock ditty. “Pra Hoje um Sol” is a bit too delicately lilting and sounds a tad trite as a result. The Allman Brothers come to mind on a couple of tracks due to the occasional slide guitar style (more like polished Betts than wailing Allman), and some tracks have a mild folk influence. A few songs are in the modern Italian / French neo vein, or at least hint of it. “Aguas” is rather nice, starting out in an old space folk mode and building to a more forceful rocker, again with a bit of slide guitar. Cálix does some things very right, and others just aren’t as interesting.

Smell of Incense - All Mimsy Were the Borogoves – If you want to wax nostalgic and hearken back to an era where a faction of psychedelic music was metamorphosing into progressive rock, you might want to check out Smell of Incense. This is not a...  (1996) » Read more