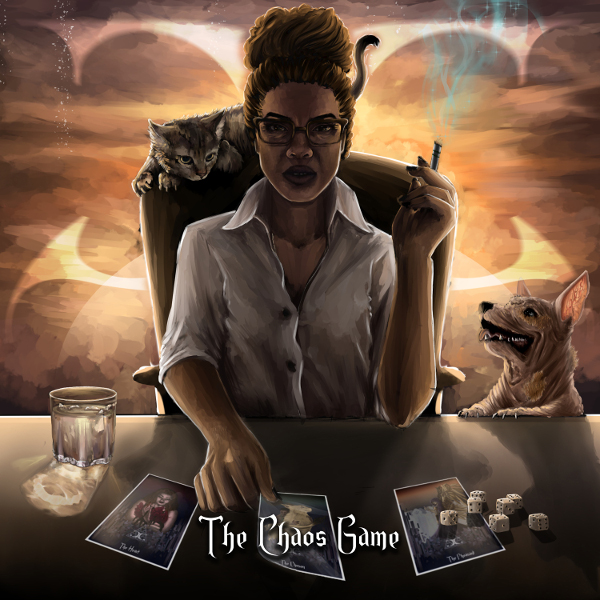 Listening to Cabinets of Curiosity, it is necessary to leave expectations and preconceptions behind, as they’ll only hinder the experience of listening to this remarkably diverse album. And now I’m going to throw out a list of bands with a similar boundless spirit as a kind of “recommended if you like”: Bent Knee, Charming Hostess, Clearly Beloved, Curious Grace and the Black Rabbit, Schooltree. Cabinets of Curiosity doesn’t sound much like any of these, but shares a similar scorn for typical boundaries, as well as the presence of powerful female vocals. Speaking of powerful vocals, The Chaos Game starts with “Death, She Walks On,” which is a mesmerizing arrangement of multiple vocal parts, apparently all performed by Natalie Hornyak, possibly using a looper. Then they dive into “Angular Sterility,” which features a really powerful distorted bass, some crazy sax lines, and disjointed acoustic guitar parts. Hornyak’s voice comes in, executing really challenging melodies with ease, bouncing through wide intervals with dramatic vibrato and bringing to mind such RIO bands as Thinking Plague or MoeTar. With “Fractals and Coastlines,” the longest track at over 12 minutes, we get a suite of multiple sections and the prominent use of pipe organ sounds, along with lovely flute, screaming guitar, more heavy bass, and muscular horn parts. The following tracks bring in still more differing sounds, with some melodic tracks, atmospheric passages, and more. Composition credits are spread around, with Hornyak on four, two for guitarist James Naprawa, one each for Jared Hirst (bass) and Anthony Warga (saxophones), plus three tagged for the group as a whole — that includes Brian Blackmire (guitar), Justin Jones (keyboards), and Kristina Bacich (flute). (There is no credited drummer, and I’m not sure what that means.) In spite of the distribution of composition, the entire album presents a story written by Hornyak — I won’t go into the details, but I can report that this is not a case where a concept album is diminished by a pretentious or silly story. Most of the tracks function perfectly well on their own, though listening to the whole hour at once is worthwhile. The Chaos Game is a powerful statement for the band’s debut, and who knows where they can go from here?

Peter Hammill - Clutch – You can count on the words to be insightful, sometimes bitter, and never trivial. The music always seems to serve the words, not the other way round. With many songwriters, you find lyrics that only...  (2003) » Read more