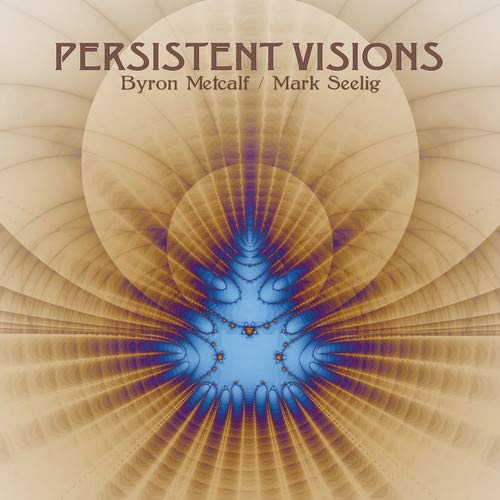 One has to wonder... If this was designed to be a continuous 71 minute listening experience, why the heck was it broken into six tracks, especially when the end of one track is no different than the beginning of the next? There are no tracks mentioned on the CD jacket, only the total time of 71:03; many CD players add a brief pause in between tracks, which makes what should be an otherwise immersive continuum of sound into six broken parts. Now that that’s out of the way, we have over many years reviewed many recordings featuring Byron Metcalf, many in collaboration with Steve Roach, including The Serpent’s Lair, Mantram, Monuments of Ecstasy and others, his style of drumming using udu, talking drums, and frame drums along with drones and pads made those recordings, as well as the one at hand, an almost mystical listening experience, slowly lifting the listener up into a higher meditative realm, allowing consciousness to wander feely in a wholly expanded state. Now add to the drumming the beautiful, wandering bansuri flutes of Mark Seelig, (who was also there on Mantram) improvising freely over Metcalf’s drumming, along with some subtle synth washes working in the undercurrent by Frore (Paul Casper) as well as some additional percussion (ibo, or water udu) by guest player Max Link, and the listener is led on a powerful journey that cycles and unfolds over time; at times the bansuri goes away while the drums go on, at other times the drums slowly fade into the background while the flutes wander on freely, It’s a spiritual immersion that continues to take the listener to a higher plane. Playing Persistent Visions two or three times back to back has a truly transformative effect on the subconscious.