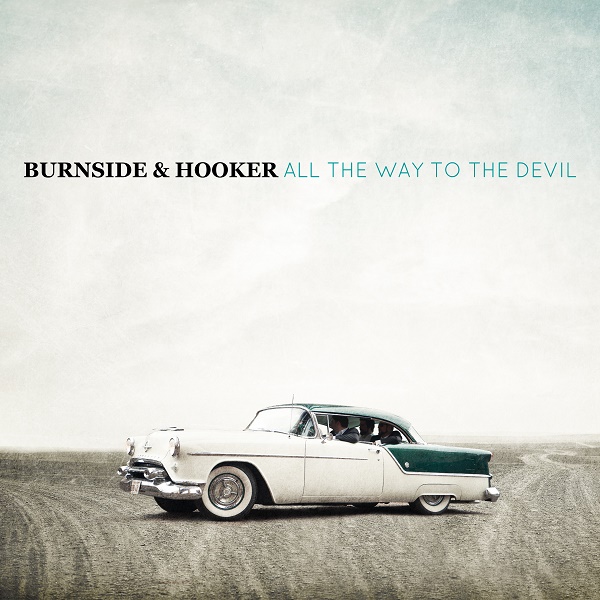 Up on the banner of the Exposé website, it may say “Exploring the boundaries of rock,” but that’s obviously an oversimplification of our mission. We explore all sorts of boundaries, some of which have very little to do with rock: electronic, contemporary avant garde, jazz, and so on. Burnside & Hooker is a new American band that might be loosely categorized as folk-rock, so the boundaries they push involve American folk music, rock, blues, and (courtesy of some of the arrangements) chamber music. Some of their arrangements fit in the same general space as Robert Plant’s recent music, with thumping drums and acoustic guitar that build up to some tasty electric guitar work, but Burnside & Hooker throw in a really nice twist with the inclusion of Ted Graham’s cello, which is often closely aligned with Ken Fuller’s acoustic bass, but sometimes breaks out for a lovely variation of the rhythm part. In addition, Diana Mayne’s viola, while frequently operating in “fiddle” mode, also works with the other strings to give the band a sophistication and charm that more standard instrumentation might lack. Lead singer Rachel Bonacquisti has a strong voice, able to belt out the songs but equally effective on the quieter moments, where her voice takes on a quirky quality that is very endearing. Michael Vogus handles the guitar, equally adept at acoustic and electric, and he usually operates in a more supportive role, which is fortunate given the number of other instruments in the mix. Which is not to say that there aren’t standout moments, like the variety of imaginative tones and effects on “Iago.” Drums (credited to “Vuck”) provide the muscular impetus the music needs. The core of Burnside & Hooker’s music may be quintessentially American, but just as this is a nation of immigrants, their music reaches out to include Celtic and other flavors. In a fair world, a band like this could gain respect in Nashville, but that’s outside my sphere of influence, so I’ll speak to lovers of music that pushes boundaries and comes from a true artistic sensibility and say that this kind of roots music is nothing to be afraid of.