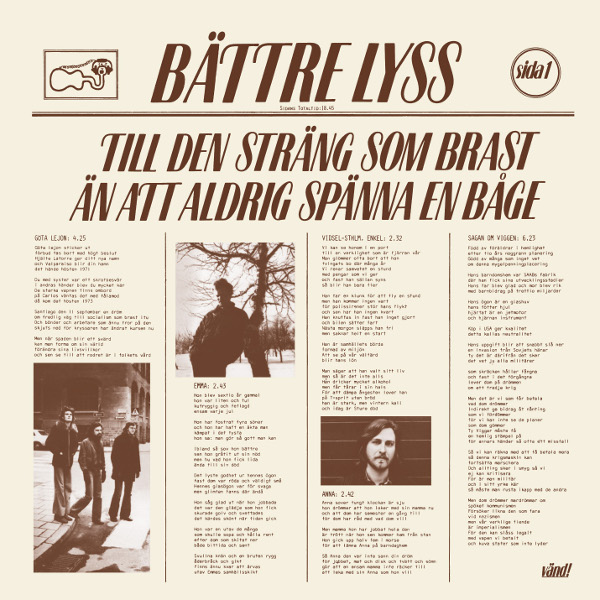 On February 22 the Guerssen sub-label Sommor released the first reissue of a rare Swedish album that was privately released in 1975, Till Den Sträng Som Brast Än Att Aldrig Spänna En Båge, by the band Bättre Lyss. Bättre Lyss was a musical project by friends Rolf Hammarlund (vocals and bass), Christer Palmquist (vocals, acoustic guitar, and piano), and Rolf Joahnsson (drums). For the album they enlisted the help from three additional guitarists, one of whom was Anders Nordh of Life, a flautist, a saxophonist, and an organist, though I think that the organ only appears on the first song. The smooth vocals and pleasant sound resulted in a fairly so-so album, nothing really spectacular happens, even for 1975. Many of the songs start as stripped-down unplugged tunes with piano, acoustic guitar, and vocals and then electric guitar added to the mix. There are some psych and prog rock elements here and there, but nothing of note. What is surprising to me is that the promo sheet compares Bättre Lyss to Silberbart, which is a non sequitur. Silberbart’s one album is full of crazed vocals, oddball instrumentations, and mixtures of blues rock and Krautrock. For the life of me, I cannot hear any similarities between these two bands. I find it bewildering that the Bättre Lyss album has even been reissued. Sometimes these obscure albums from decades ago have gone unrecognized for very good reasons. However, if you enjoy undemanding gentle music with melodic vocals, perhaps Till Den Sträng Som Brast Än Att Aldrig Spänna En Båge is up your alley.