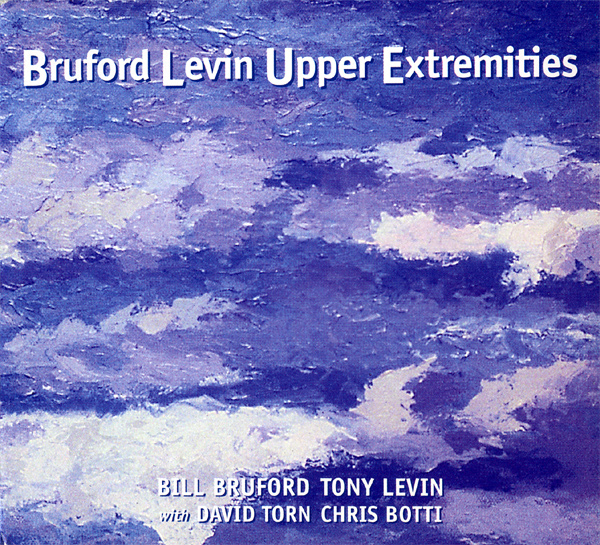 Upper Extremities serves as one of the new Crimson off-shoot projects while the next incarnation literally plays its way into existence. Bill Bruford and Tony Levin have conceived and executed a suitable follow-up to 1988’s Cloud about Mercury with the first track, "Original Sin," picking right up where they left off a decade ago. Significant improvements are evident in this remarkable work led by possibly one of the best rhythm sections in modern music. Torn himself is an icon of sorts since his playing consistently adds a shrouded texture of darkness, mystery and menace. Chris Botti injects a melodic trumpet intro, and the song turns into a torture-shred guitar solo. Botti now fills the role previously held by Mark Isham, and he adds a style a la 80s Miles Davis on six of the tracks. "Etude Revisited" starts and ends with group dinner conversation, but becomes a re-worked rocking scorcher when Torn sends the piece into major chord heaven. "Cracking the Midnight Glass" is something altogether more raucous, although Bruford’s idea of an updated Cream is more akin to Zeppelin’s "Kashmir." Also worth noting are the tracks "DrumBass" and "Torn DrumBass," which are duet compositions featuring the unique Taos bassdrum. Side by side liner notes are included in a separate sheet with complementary perspectives of each track from both Tony and Bill. Although not as dark as any Crimson recording, B.L.U.E. is a shining ring on the challenging clasp where rock meets jazz. And it chooses a double espresso instead of a latte.