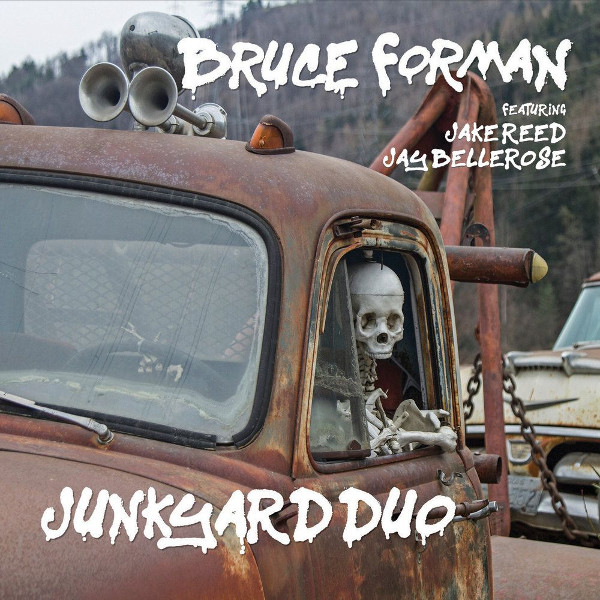 This album is the kind of thing where it’s more or less pointless to pay attention to individual tracks. There are 29 of them, mostly one minute or less in length, so it’s best to ject think of it as a single 41 minute piece with lots of sections. Bruce Forman is a jazz guitarist with a firm command of American blues and folk styles, and for much of Junkyard Duo he sticks to acoustic, delivering tasty chords and licks like it was 1962. The kicker is that he’s accompanied by Jake Reed and Jay Bellerose, who play an assortment of percussion consisting partly of found objects including luggage and other reclaimed junk. Sometimes the sound is more or less conventional, with a snare and hi-hat, but other sounds include various flavors of bangs, crashes, skritches, bumps, thumps, and splats that you wouldn’t expect to hear in a musical setting outside a performance of Stomp. It is, of course, reminiscent of Richard Leo Johnson’s Vernon McAlister recordings, though Forman’s guitar is generally less experimental than Johnson’s, letting the percussion be the outside factor. About halfway through the album, you start to hear some electronics, and they crop up from time to time in the second half of the program. The guitar playing is universally good, generally falling within the bounds of folk-jazz, only occasionally straying into territory outside the traditions. I’m of mixed mind about the end result, however, because the tracks are so short that you never have much to latch onto. He’ll play a short intro, state the main melody with backing chords, and then end, with hardly any development or expansion on the basic idea of each piece. Obviously, it was not his intention to flesh out these tunes, but the decision leaves the listener with no lasting impression other than having heard a whole bunch of little snatches of pieces.