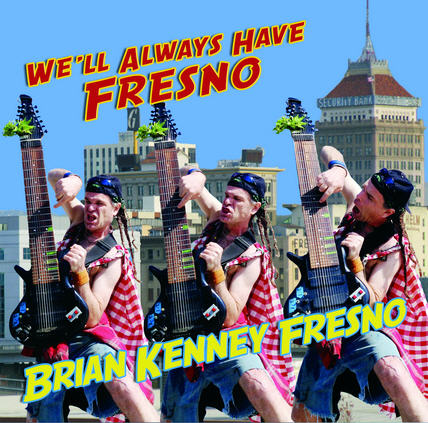 We’ll always have what? Those in the know, and almost anyone who’s ever lived in California will know that Fresno is one of the state’s largest cities, located about 200 miles south of Sacramento in the state’s fertile San Joaquin valley, and remains an important part of California’s “bread basket.” Home of Cal State Fresno and Fresno City College, the city has an undeserved bad reputation. Brian Kenney Fresno (henceforth BKF) is a songwriter and multi-instrumentalist who pretty much marches to his own beat, well outside the mainstream, but certainly one who deserves greater acclaim than the obscurity that he now seems to wield. He has three or four recordings prior to this one, and a few live DVDs also. Oh, and did I mention? Most of his songs are about, or somehow related to Fresno! BKF’s approach is a good fun, singalong absurdist style that covers a variety of topics: The opener “Gina Pepe” is about a girl he used to know in high school; “Daddy Doggy Daughter Day” is a song about his adorable little dog that’s featured on the CD cover with a little red coat; “Chick with a Dick” is... well, a hilarious true story I guess. The latter is performed by his band E Is for Elephant, but on all the other tracks here, BKF plays all the instruments – his main instrument being a 12 string Warr Guitar – and sings all the vocals with a little help from his friends. A couple of the dozen tracks are just short narratives, and there are a couple of ‘serious’ tunes here also: the first one you’ll encounter is the beautiful acoustic instrumental “Prelude de Fresno in E Minor” (he had to get Fresno in there somehow); others include “Orcas Island” and the surprisingly avant-garde exploration “Trees,” written by fellow traveler Mark Growden. “Ozone” is another fairly avant-garde piece dealing with Fresno’s air pollution issues. So what is this comparable to? BKF is certainly operating on his own wavelength, but I am occasionally reminded of Captain Beefheart (but without the strong blues roots), or his acolyte Zoogz Rift; and the crude stuff is actually more just injected humor, nowhere near the raunch level of Flo & Eddie era Zappa. So all taken, this is probably like nothing else you’ve ever heard.