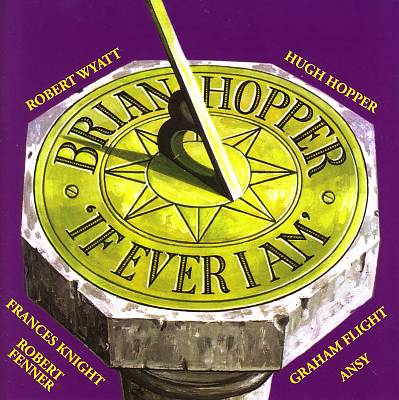 Canterbury fans may recall Hugh’s brother who was a member of the Wilde Flowers and played sax on Soft Machine Volume Two. Since that time Hopper was also involved in the bootleg quality Canterburied series on Voiceprint making available rare performances from various acts as well including Beggar’s Farm and Zobe. 2004 found the sax player and composer enlisting old friends for work on new songs and a revisit on old ones. Both Hugh and Robert Wyatt appear in support and lead roles on various pieces. Wyatt delivers two memorable lead vocals on the “The Pieman Cometh” and a reprise of “Hope for Happiness.” The former piece is a slice of synth keyboard and programmed drums that benefits from Wyatt’s choired vocals and trumpet. The latter nine minute revisitation of the Softs’ classic tune from their first album has Wyatt crooning over an Indian raga motif that supposedly was the original plan for the piece. Francis Knight gives the best piano accompaniment on the disc on “Sometimes It Is.” Alternately, “Modality” is perhaps the best conceived piece on the disc as the two Hopper brothers find familiar jazz ground in their bass and sax interplay. Old bandmate Graham Flight provides a techno keyboard loop on “For Freedom,” where Wyatt’s sampled voice works in a successful but somewhat uncharacteristic fashion. In closing, it’s clear that Hopper has maintained close roots to his Canterbury jazz leanings as fans will no doubt agree.