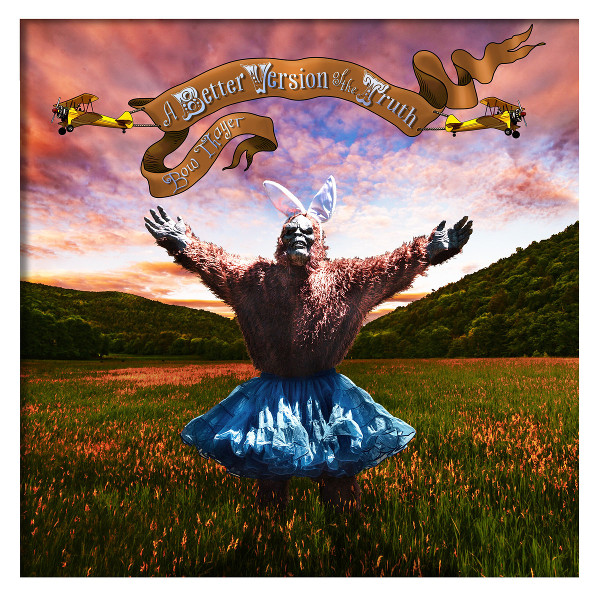 So here we have the latest release by Bow Thayer – singer, songwriter, and multi-instrumentalist (banjo, guitar, bojotar, synth, keys, and percussion) – along with his bandmates Jeff Berlin (drums), Justin Guip (organ), J.D. Tolstoi (Fender Rhodes, organ, and synth) and the late Alex Abraham (bass and vocals). The eight pieces herein feature a curious juxtapostion of memorable songs, grooves, folk, and Americana, with introspective and adventurous instrumental interludes tying everything together. “Purple Tree Frogs (Are Trying to Kill Me)” is an example of the latter, beginning with a synth and bass groove along with something akin to tree frog sounds, with drums joining in soon after for a fun romp through the swamp, hitting a break, then ending with electric piano taking over the lead with drums riffing throughout. There are no words, it’s just a fun little instrumental adventure. Opener “The Great Expanse” opens to a busy and proggy riff that takes nearly two minutes to spin down into some great vocal harmonies that wouldn’t sound out of place on an early Yes album. “Queen Kong” with its bluesy feel and rough vocal might have the listener reminiscing about Captain Beefheart until the song shifts into a smooth mid-70s pop feel, but soon enough it all moves back to where it began, concluding at a little over four minutes. The title track begins with some badass slide work on bojotar, driving home a masterful groove and some thoughtful lyrics to boot (all song lyrics are on Thayer’s Bandcamp site). “Slowlow” is another instrumental living an a sort of acid jazz groove with banjo leading over a fabric of electric piano and mbira, with drums pacing the proceedings. The album closer, “The Rita Effect,” is a bit of an autobiographical piece that was fundamental in Thayer’s transition from city to country life, Miss Rita being a reference to the meter maid in the Lennon-McCartney song (“If it wasn’t for Rita then I’d never be here”), with an eight-and-a-half minute expansive musical palette that snakes through heavy grooves and gentle improvisations, one of many great songs to be found herein. This was originally going to be available as a download only, but as last year drew to a close it finally find its way onto a compact disc release.