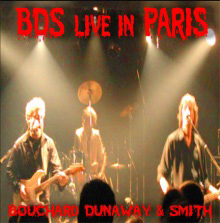 Take the rhythm section of the 70s Alice Cooper band and the front end lead guitar from Blue Oyster Cult, and what do you have? You get a pretty tight hard rock act that relies on honest riffing and a firm bass and drums pairing. The band’s new material is interspersed between classic rock performances of hits including “Don’t Fear the Reaper” as well as “School’s Out” and “Under My Wheels” from the Alice Cooper catalog. The former piece is done up in a creditable version despite a weak lead vocal and harmony. Opening the gig is one of six new pieces by the trio and it’s a plain no-fills rocker regarding a man’s lustful desire for a ménage a trois. "See You on the Other Side” is a power ballad while “Vampire Night” relies on brash riff to push a 4/4 tempo. Dunaway takes a bass solo mid-way through the live gig that reprises pieces such as “Billion Dollar Babies,” complete with extended runs and zoops. Other original pieces such as “The Jokes on You” and “Bad Girl” move along a familiar rock groove. The latter piece is probably the best of the new songs by the lineup with its descending bass line and plaintive lyrics. “Black Juju” is the bassist’s song that comes the closest to establish a linear groove for the trio to push along. Overall it’s not a bad project for these old time rockers to have hatched considering that their glory days are far behind them.