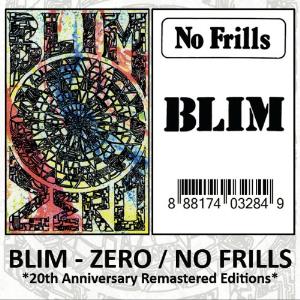 Way back in the heady days of the early ‘90s British space-rock jam band scene there was Blim, regrettably and unfairly overshadowed by bands with bigger names who got an earlier head-start, but they still managed to get their material recorded onto two privately released cassette tapes, both of which are finally reissued in the package at hand, both including bonus tracks, for a total of two-and-a-half hours of music. The band’s debut Zero features a mostly instrumental six-piece lineup of guitars, bass, flute+keys, sax, drums, and synths+samples+tapes, with the infrequent voice parts shared by saxophonist Phil Cook and drummer Neil Spragg. While the evidence of Hawkwind influence is fairly omnipresent on Zero, there is a strong current of progressive rock running through it as well as touches of jazz and harder rock styles buried within these grooves. One minute the listener might forget they’re listening to an aggressive psychedelic space-rock band and find themselves in a soundworld reminiscent of Mirage era Camel or some of the mid-70s krautrock-meets-symphonic sound one might find on the scads of rare German reissues on the Garden of Delights label. The material is strong, but the production is about what might be expected for a self-produced cassette release of the period. The bonus material (three cuts) on the Zero disc is clearly of early demo origin, not that well produced, and more fun than anything else.

Even though No Frills is only from one year later, the band has gone from six members to four. Spragg is still on board behind the drum kit, along with guitarist Andy Read and keyboardist, tapes and effects man Tony Child. New to the band is bassist / keyboardist / mandolinist Robert Illesh, who, along with Read is covering vocals. The “frills” – the sax and flute that featured prominently on their first release, are gone, along with many of the softer more symphonic moments, and the space-rock vibe is even a bit subdued here as well, now opting for a stripped down, more song-oriented edgy guitar rock sound that predates the advent of “math rock” and occasionally recalls Red era Crimson, with a bit more jazz influence. There is still a strong jammy quality to many of the tunes, and voice parts are still used very sparingly, but No Frills is by far the better produced of the two albums, sporting a cleaner sound and tighter production overall. The two discs are very different, but still similar in many ways; in summary, there is a lot of music in this small package, and it’s probably best to absorb it one disc at a time. Both discs are excellent, but I give a slight edge to No Frills.