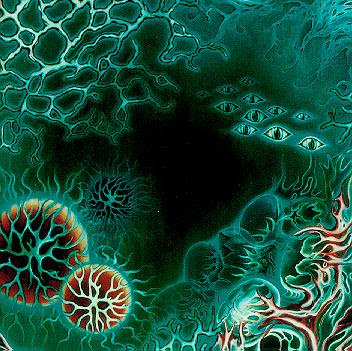 Blacklight Braille is a name I've been seeing for years but only recently decided to check their music out. So for any seasoned BB fans out there, please keep in mind this is this writer's first exposure to their music. The band is an odd congregation of fourteen or so musicians playing just about everything from the basic guitar, bass, drums, synths, woodwinds, various percussion, even a groan tube and an Iroquois snapping turtle rattle. Seven of the fourteen share vocal credits. Listening to the music, though, I doubt that at any given time more than six or seven persons could be involved, so the cast of characters most likely rotates. So what does this sound like ? On the back insert it states in plain English: "A Fringe Rock Recording"; I can't argue with that. Imagine a symphonic version of the early Residents meets psychedelic guitars with poetry narrated throughout, and one might begin to fathom what the style is like. Most of the tracks are linked by a seagoing theme: songs like "Sudden Squall,” "Between Bell Buoys" and "Beachcomber's Rock" are basically collages of disjointed music, taped sounds, spoken (and often distorted) voices, and other experimental effects. "Riptide Run,” a cool, psych surf guitar led track comes about as close as the album ever gets to 'normal.' With track #7 "Cape Breezyhead,” the album begins to take on a symphonic dreamy feel, combined with lesser amounts of all the aforementioned, as it remains throughout the balance of the album's thirteen tracks. This is fairly unusual music, recommended for the most adventurous listeners; in short, if you enjoy things like The Residents' Not Available through Eskimo, then you should have no problem with this.