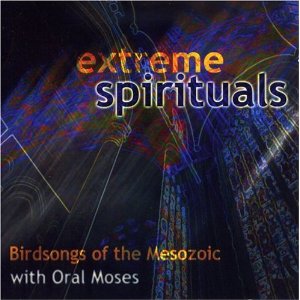 This album is likely to split Birdsongs fans. Some might consider it a brave creative statement while others may see it as a failed experiment. I’m in the first category and in my opinion albums like this actually live up to the label progressive rock. Of course, any preconceptions toward old Negro spirituals, the context at the heart of Extreme Spirituals, will strongly influence the listener’s reactions. The band has gone one step further than using Negro spirituals – the basis of all gospel and blues music – as the inspiration of each piece. For the first time they’ve also included a vocalist on an album, Oral Moses, whose bass baritone imbues each track with a deep sense of authenticity. You’d expect more than a simple backing arrangement to these 12 songs and here the Birdsongs don’t disappoint. Often the instrumental arrangement can be seen as one big counterpoint to Moses’ vocal, as on “A Little More Faith in Jesus,” while others slide alongside more sympathetically, as with “Nobody Knows the Trouble I See.” At times the instrumental backing is little more than soft piano and flute, though elsewhere a strong rhythmic push from guest drummer Larry Dersch gets married to Michael Bierylo’s dynamic guitar, Erik Lindgren and Rick Scott’s keyboards, and Ken Field’s saxes, as on “Joshua Fit the Battle of Jericho.” Overall this is a more elegant and reverent Birdsongs album compared to past efforts, a reverence for the material that seems totally appropriate and which is given a superb execution.