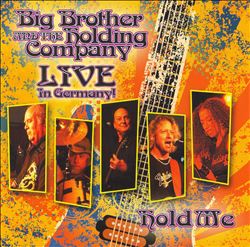 For the better part of forty years the core members of Big Brother (Peter Albin, Dave Getz and Sam Andrew on bass, drums and guitar respectively) have been playing together, and by now are an amazingly tight unit. Their endless dilemma is trying to find singers who are great enough to fill the shoes of the late, great Janis Joplin. This time they certainly did! The disc at hand was recorded at the end of a European tour at the Burg Hertzberg festival in the summer of 2005, and features the amazing and soulful vocal talents of NY based rock singer Sophia Ramos, who steps up to the plate capably, both on the older numbers as well as a few new songs the band presented here. She belts out classics like "Down on Me," "Turtle Blues," "Ball and Chain," "Women Is Losers" and "Summertime" effortlessly, with all of the power and passion that one could hope for, even upping the ante sometimes. Also featured on this set is second guitarist Chad Quist, who meshes with the core three members perfectly. This set is also available as a DVD with three additional tracks included on the band's website. Another astonishing live show from a superb and timeless band!